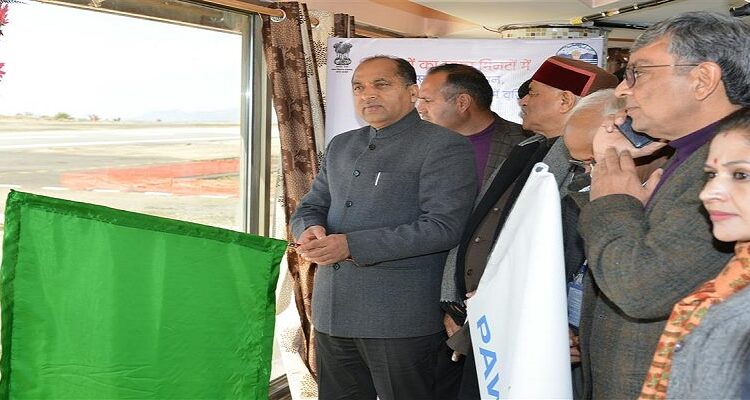 Shimla: Union Minister of Civil Aviation Suresh Prabhu on Thursday launched the UDAN-II scheme for the nation by flagging off the helicopter flight through video conference from Shimla to Chandigarh from Jubbarhatti airport, near Shimla.

While addressing the people on the occasion through video conference from New Delhi, Suresh Prabhu said the UDAN-II scheme would not only provide better air connectivity to the people of Himachal Pradesh, but would also help in providing convenient, comfortable and fast commutation facilities to the people at the time of illness and other emergencies. He said the UDAN-I was launched by Prime Minister Narendra Modi in the year 2017.

He said this day would be a red letter day in the history for setting pace of development in the state. He said that the state government under the leadership of Chief Minister Jai Ram Thakur was fast forging ahead on the path of progress and prosperity. He said the Union Government would provide all possible support to the state for its fast development and growth.

The Union Minister said the UDAN-II would also give a big boost to the tourism development as there was a vast tourism potential in the state to attract domestic as well as foreign tourists.

Chief Minister Jai Ram Thakur while thanking the Union Civil Aviation Minister for choosing Shimla for launching UDAN -II for the country, said that the State had 63 helipads and that two heliports were coming up at Shimla and at Kangnidhar in Mandi district. He said OLS survey has been carried out for construction of airport in Mandi district.

Jai Ram Thakur said the flight under UDAN-II would take off at 10 A.M from Chandigarh and reach Shimla at 10.30 A.M. It would take off at 10.55 A.M from Shimla and reach Chandigarh at 11.25 A.M. Initially, it would be a three-day flight in a week but after fortnight it would have six flights in a week. He said that one way fare would be Rs. 2280 and would ensure that the common man could also take benefit of this service.

The Chief Minister said apart from Shimla-Chandigarh, UDAN-II scheme would also cover flights between Shimla-Kullu and Shimla-Dharamshala. This would ensure that all the major tourist destinations/circuits of the State get air connectivity. He said this would not only promote tourism activities in the region in a big way but also give boost to economic activities in the state.

He thanked the Union Minister for providing all possible help for strengthening air connectivity in the state.