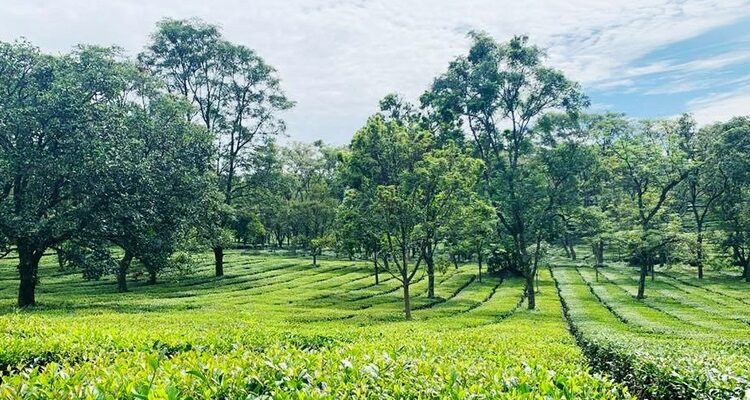 Kangra well known as ‘Valley of Gods’, I like to call it “Gods own Adobe”. With the Dhauladhar mountain range on its background there is nothing more majestic that could have served as a backdrop. The region is home to the world famous Kangra tea. Which the British implanted in the region for the world’s oldest serving Royal Dynasty of the Katoch’s.

The heritage of of Kangra goes back to centuries. Kangra became a district of British India in 1846, when it was ceded to British India at the conclusion of the First Anglo-Sikh War. The British district included the present-day districts of Kangra, Hamirpur, Kullu, and Lahul and Spiti. Kangra district was part of the British province of Punjab. The administrative headquarters of the district were initially in Kangra, later moved to Dharamshala in 1855. Kangra region reins changed hands from Raja Ghamand Chand who was appointed the governor of Jullundur Doab under the Afghans in the 1700’s to Maharaja Ranjit Singh’s Sikh Empire in later 1700’s before the British took over the region in the 1800’s.

IT WAS IN THE MID-1800S THAT THE BRITISH SAW THE POTENTIAL OF A TEA PLANTATION IN THE REGION AND DR WILLIAM JAMESON, THE THEN SUPERINTENDENT OF THE BOTANICAL GARDENS OF THE NORTH WEST PROVINCE VISITED KANGRA. A FEASIBILITY SURVEY WAS CONDUCTED AND IN 1848, THE REGION WAS FOUND SUITABLE FOR TEA PLANTATION.

The China Jat variety of Camellia plants was later planted in the following decade. By 1882-1883, tea was mentioned in the Kangra district gazette as “Probably superior to that produced in any other part of India”. By 1886 and 1895, the tea received gold and silver medals at International conventions held in London and Amsterdam. Soon Kangra was well known as the “Tea Capital of North India”.

The earthquake of 1905 forced the British to sell their estates and leave the area. Until the middle of the 20th century, the new owners continued to grow tea. However, only small amounts of tea was manufactured as there were very few factories. Over the last 40 odd years, the Kangra Tea found its place back on the Tea Map of India and now is heading towards its prime again.

REGIONS MAKES KANGRA GREEN AND BLACK TEA ALL THE MORE EXCLUSIVE. WHILE THE BLACK TEA HAS A SWEET LINGERING AFTER TASTE, THE GREEN TEA HAS A DELICATE WOODY AROMA.

The climate, the characteristic terrain and soil conditions, with the coolness of the snow clad Dhauladhars all play a role in crafting a delightfully distinct cup of quality tea. Particularly the first flush with an aroma and flavour that has an unmistakable tinge of fruitiness.

THE FIRST FLUSH OF KANGRA TEA IS KNOWN FOR QUALITY, UNIQUE AROMA AND TINGE OF FRUITY FLAVOUR.

Kangra tea is more like a full bodied wine its bold taste that’s come from it higher liquor character. The demand for Kangra tea has been increasing steadily as more and more people are getting heath conscious aware and choosing to drink more of healthy drinks and substitute their sodas with natural drinks, either hot or cold, internationally and in domestic markets. When brewed, the flavour is very vegetal and unique with its very pale liquor which can be well described as the Cup of Golden liquor.

Kangra Tea is not just a usual tea. It has medicinal qualities. The presence of high level of antioxidants makes it great digestive agent which helps boost immune and metabolic body functions. Recent studies have put Kangra teas properties on the same table of ashwagandha herb. Multiple researches have been undertaken across the country to explore more and more about the possible benefits that Kangra tea offers.

While most of the Kangra tea is exported globally, it’s also found in the collection of Luxury hotels and Tea boutiques nationally and internationally.

SOME SHORT KEY NOTES FOR YOU TO KEEP IN MIND WHEN YOU PLAN YOUR TRIP UP HERE.

• Tea belt of Kangra region spreads from Dharamshala to Bir with most of them concentrated around Palampur. Most of the tea is grown between altitudes ranging from 900m to 1500m above sea level.

• As soon as the tea is plucked, it’s carefully laid on to withering beds which has air circulation. The process is meant to reduce the moisture content of leaves before they are rolled. The withered leaves are then put into rollers for breaking leaf cells and initiating fermentation. The process of rolling depends on the moisture level of the leaf and is one the most technical processes involved in preparing the Kangra Orthodox Tea. Post rolling, the leaves are allowed to ferment in well ventilated area for a while till the right colour indicators are visible. For producing the Kangra green tea, its directly sent to a steamer, where it is briefly steamed and the green character of the leaf is retained. Once the brew master is satisfied with the process, its moved to a dryer. In this process, the drying machine quickly dry’s the leaves and arrests further fermentation and reduce moisture to a negligible %. Post this, the tea is ready to be enjoyed, but for right segmentation, the tea is further graded and sent of packaging or value addition process of enhancing the tea with organic herbs, spices, flowers, fruits before the final packaging.

• Kangra tea is a registered Geographical Indication (GI) with its own significant symbol: two leaves and a bud. 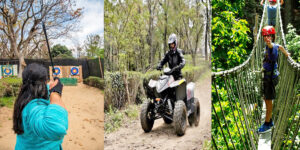 Enjoy an All Terrain Vehicle ride in the Tea Plantations on one of India’s longest private ATV trail along with more thrilling adventure activities at Himalayan Adrenaline, Raipur Tea Estate, Thakurdwara, Palampur.
www.himalayanadrenaline.com 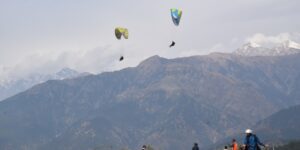 Paraglide at Bir & Billing. Enjoy the breath taking views of the Kangra Valley with a back drop of Snow clad Dhauladhars. While you take off from the Asia’s highest paragliding site.

Maharana Pratap Sagar is a well-known wildlife sanctuary and offer the opportunity to sight migratory birds along the Pong dam area which has become home to major species of birds, fishes and animals in addition you can visit the historical site of Bhathu Temple (Bathu ki Ladi).

The Kangra Tea region is surrounded by activities & experiences that suite individuals and families equally with its warm hospitality hosts ranging from boutique homestays to Luxury chains like Hyatt and ITC it’s a perfect destination in the hills.