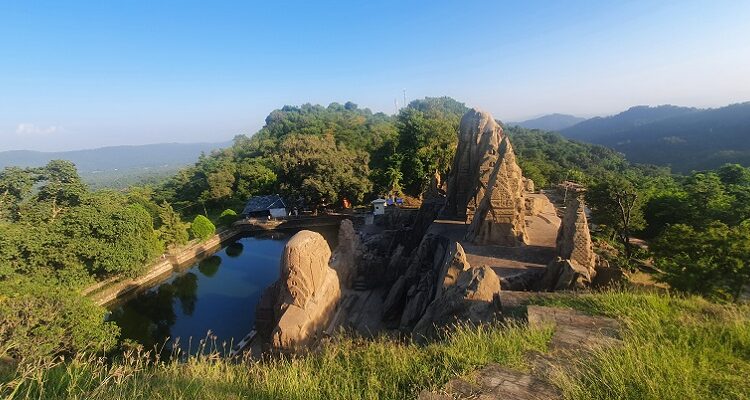 This is exactly what took us to one of the four rock-cut temples in India. As per natures law, every civilization collapses and rises. Every civilization has given the world great buildings, monuments of religious importance, forts, caves, palaces to name a few. But once the civilization ends, all that remains are the majestic structures that help us to know about our past, our ancestors and their unique way of life. The ancient ruins indirectly become the souvenirs from the past, fetishlivecamsforce.com to be handed over to the future generations. 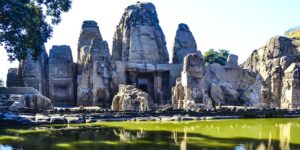 These rock-cut temples are also known as the Elloras of Himachal Pradesh or Himalayan Pyramids due to their form and size. As compared to the other three rock-cut temples, footprint of Masroor temple complex is three times bigger in size. These Himalayan pyramids are relatively unknown to lot of people and hence sparsely visited.

MASROOR IS SITUATED IN KANGRA DISTRICT, AROUND 60KM FROM DHARMASHALA, AWAY FROM THE BUSY TOURIST ROUTE. THESE ARE THE DISTINCT LARGEST STRUCTURES EXCAVATED FROM SANDSTONE ON THE RIDGE OF THE MOUNTAIN – A COMPLEX TOTALLY HOSTING A GROUP OF 15 ROCK-CUT TEMPLES. THIS TEMPLE COMPLEX IS PARTLY IN RUINS BECAUSE OF A MASSIVE KANGRA EARTHQUAKE OF 1905.

As compared to other 3 rock-cut temples, this temple complex is located on a hilltop at an altitude of 2500 feet from the mean sea level (MSL). The temple complex faces the mighty Dhauladhar Himalayan range in the north-easterly direction almost alongside the course of River Beas. At the same time, it also faces the rising sun, as it is considered auspicious that the first rays of the sun fall on the main idol. It is said that these group of 15 monolithic rock-cut temples are built between 8th-9th centuries AD. These rock cut temples have been carved out of the sandstone monoliths which make up the landscape of the temple complex. The architecture of these temples is overwhelming and has been built in Nagara style.

NAGARA STYLE IS AN EXTREMELY IMPORTANT STYLE OF CONSTRUCTION IN HINDU TEMPLE ARCHITECTURE. THE MAIN CHARACTERISTIC OF THIS STYLE ARE THE TOWER OR PYRAMID FORMS OF THE BUILDINGS.

The Nagara style of architecture predominantly exists in northern parts of India, between the Himalayas and the Vindhya mountain ranges. It is believed that rock-cut temples at Masroor are one of the earliest exponents of Nagara style construction. The distinguishing features of the Nagara style temples in Himachal Pradesh are very similar to those of Uttar Pradesh, Rajasthan, Orissa and Central India. Generally the sanctum is preceded by mandapa. Temple is always approached by a single doorway. 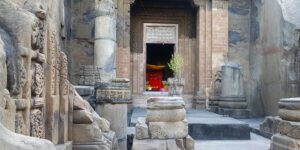 The shrine consists of three components, mainly the socle, the wall and the shikhara which rises to multiple storey. Shikhara is further divided into three parts named as amalaka, chandrika and topmost portion known as kalasha. Superstructure consists of three types namely- phamsana, latina and valabhi.

THE MONUMENTS IN THE MASROOR TEMPLES APPEAR AT FIRST TO BE A COMPLEX OF SHRINES, BUT IT IS AN INTEGRATED MONUMENT. THE MAIN SHRINE LOCATED AT THE CENTRE FACES NORTHEAST TOWARDS THE DHAULADHAR PEAKS INSTEAD OF TRADITIONALLY FACING EAST AS PER HINDU TRADITION.

The entire complex is planned on a square grid symmetrical pattern. The main temple is bounded by smaller temples in a mandala pattern. The core sanctum of the temple complex has a square plan, as do other shrines and the mandapa. The main spire is flanked by secondary spires of smaller size, all eight symmetrically placed. The main sanctum has four entrances, with the east side entrance complete, north and south partially complete and the fourth entrance on the west is incomplete. The eastern entrance had a large mandapa and entrance doorway, which was destroyed in the 1905 earthquake. The antarala or the ceiling is ornate in form of an open lotus pattern and has remained undamaged till date. The lintel on the doorway has miniatures of Shiva and his sons Ganesha and Karthika. 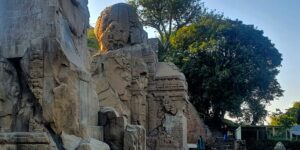 Adjoining to this mandapa, there were two stairways which could take the pilgrims to the upper-levels. The stairs were designed in such a way that they appear as if emerging naturally out of the rock.THE TEMPLES WERE
CARVED OUT OF NATURAL MONOLITHIC SANDSTONE ROCK. CARVINGS ENGRAVED ON THE TEMPLES CAN BE STILL SEEN DUE TO THE HARDNESS OF THE ROCK.

In certain places where the stone was little softer in nature, the carvings have been eroded over the time. The internal and external walls of the temples are intricately carved with floral and geometric patterns, animal motifs depicting the lifestyle of the bygone era. As one can see that every piece of the temple walls has a story of craftsmanship and the artistry of the masons who carved these temples.

All the spires in the temple complex are built in typical Nagara style. In particular, these are curvilinear or curved in shape arranged in a rhythmic series of superimposed reducing horizontal square slabs with offsets, each offset called lata, highlighting the natural growth of stone. The stairway spire is based on four twisted squares featuring eight rotating lata spines that interchange with eight right-angled projections. Every temple is extensively and has idols of Lord Ram, Sita and Lakshman carved out of block stone. In the centre of the temple, there is a figure of Lord Shiva due to which locals believe that the temple originally was of Mahadev. Sculptures in Masroor temple complex is very different to rest of the temples of Himachal. 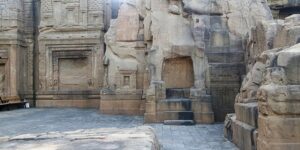 The site was damaged in the destructive Kangra Earthquake of 1905, destroying numerous statues and shikharas in the temple complex. Due to its monolithic nature, Masroor Rock-cut temples were able to survive till date while many other ancient monuments in Himachal were destroyed. In the remains, one can find large sculptures of Varuna, Agni and others Vedic deities.

ANOTHER IMPORTANT FEATURE OF THE TEMPLE COMPLEX IS THAT IT HAS A SACRED POOL IN THE FRONT EASTERN SIDE.

It is said that the sacred water tank was constructed around early eighth century. It is rectangular in shape admeasuring about 25×50 meters and is filled with water throughout the year. There are also two free standing sub-shrines adjoining the pool.

According to the local folklore, the Pandavas spent lot of time during their exile in the temple complex. During that time, Pandavas decided to complete the construction of the staircase which leads to heaven in the same day till early morning. Due to this, Lord Indra got tensed as he thought completion of stairway would make access to heaven very easy. Hence he disguised himself as a crow and crowed loudly before the dawn. As a result, the Pandavas could not complete the staircase. 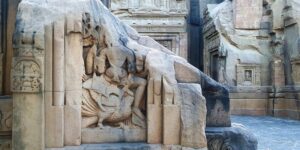 Another legend regarding the construction of the rock-cut temples is that, the whole temple complex was carved out in one night. No one knows who carved them as there are no inscriptions or no written information about the temples. Work had to be stopped with fall of the first sun-rays which is why few of the shrines and temples remained incomplete.

The excavation of Masroor rock-cut temples took place during the time of Yashovarman, about whom very little is known. One is not completely sure whether these temples were commissioned by Yashovarman, but it is very evident that this was the beginning of the Nagara style of Architecture. It can also be said that during his time, there was political stability and art was well appreciated. 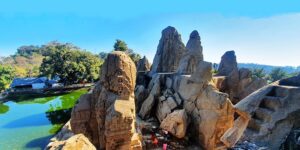 There are abundant Hindu temples in the state of Himachal Pradesh which are worthy of critical appreciation. This shikhara style rock-cut temple of Masroor is one such temple complex which is considered one of the most beautiful temples of India. These rock-cut monuments act as footsteps in the pages of history. The monolithic rock cut cave temples of Masroor are one such paradigm and depiction of architectural jewel well conserved over centuries for future generations to come.

Neha Raje and Swapnil S Bhole are practicing architects from Mumbai. They have been passionately involved in research projects and have chosen this path as one of their mainstream career goals alongside working on various interesting architectural and interior projects. They have been doing research in Himachal Pradesh since 2003 and till date have documented around 30 villages including temples, forts, palaces and residences. They are also involved in teaching at Architectural institutes, delivering guest lectures, thus contributing with knowledge and ideas at the grass root level towards paths less chosen.