Leh: Union Minister for Tourism Prahlad Singh Patel on Tuesday started his 3 day tour to Leh for exploring the opportunities of increasing tourism in the region. Union Tourism Minister is leading a delegation of senior officials of the Ministry of tourism to meet local administration and tourism stakeholders to discuss and draw plans for development of tourism sector in Ladakh region.

Speaking to media, Prahlad Singh Patel said Ladakh is the best place to visit for any tourist because it has natural beauty, peace and great culture. There are innumerable opportunities in Ladakh and UT status will provide Ladakh a great platform to prosper quickly since there will be better coordination with the Centre, various agencies as well as stakeholders of tourism industry.

Earlier, after reaching Leh, the minister started series of meetings with various stakeholders and discussed proposals of promoting tourism and cultural activities in Ladakh. MP from Ladakh Jamyang Tsering Namgyal was also present during the meeting. The minister also held meeting with members of Cultural Society of Leh. 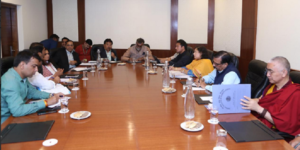 The minister also held a meeting with Travel Trade Alliance of Ladakh region to understand the problems of stakeholders in tourism sector. In the meeting different stakeholders from the alliance raised their problems before the Minister. They also gave suggestions to Minister for expanding opportunities in tourism sector in the region. Promoting adventure tourism, winter tourism and cheap and better connectivity from different part of countries to Leh, Kargil and Nubra Valley in all seasons remained the highlight of the discussions. They also requested the minister to facilitate opening of Hotel Management Institute and Mountaineering Institute in the area to promote local talent in the region. The Alliance members also gave a memorandum regarding their concerns to Union Minister.

In response to Alliance concerns and suggestions, the minister assured them that the government is very positive regarding their concerns and full support will be given to Ladakh regarding development of tourism in the newly announced UT. He said that central government has arrived at the doorstep of Ladakh to fulfil the dreams of the people of the region and will give support to them.

Stok Kangri: Learning How to Dance with Lightning