A Walk through the Mullick Ghat Flower Market 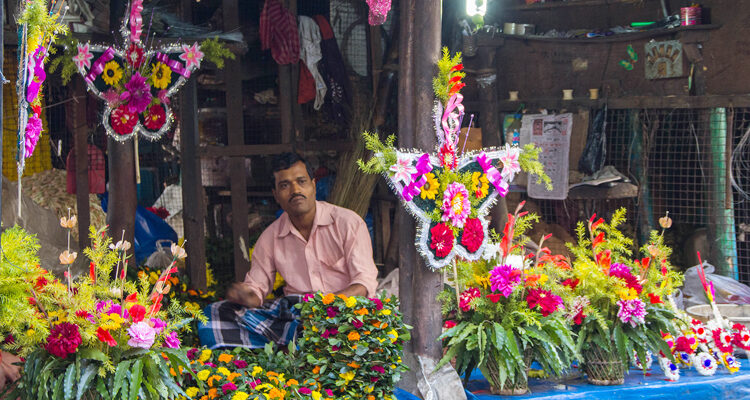 Today is not just another day for Nimai Mondal. Nimai sells flowers at the largest flower market of Asia. The Mullick Ghat flower market just beneath the iconic Howrah Bridge has been there almost since time immemorial. Well almost, although history says that it is more than hundred years old. Like many other primary producers, Nimai brings flowers to the market, sells some to the bigger flower sellers with shops and then sets up his temporary stall. He is a second generation flower producer and seller. Today is a Bengali marriage date and a Sunday too, hence the rush and buzz is even more. Most of the marriage dates mean more customers and more sales. 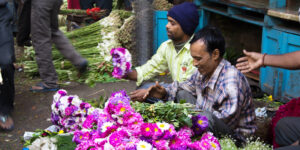 The flowers which one sees in the market are mostly locally grown in and around West Bengal. Kolaghat from East Midnapore, is a small town situated on the banks of the Rupnarayan River. This is one of the major suppliers of flowers to this market. Dhantola and Batkul from Nadia district are also major suppliers of this market.

What flowers are available in Mullick Ghat? The question should rather be what flower is not available in the market. There are flowers which are needed for puja purpose and then there are flowers for other purposes including decoration. Red Jaba or Hibiscus, Marigold in yellow, orange or red varieties are all dedicated for pujas as well as for wedding decor. They say there are around fifty varieties of marigold which are found and one can safely say that almost all are available here. Other than the whole flowers and garlands, there are crushed flowers too. If you walk around the market towards the ghat, you will see women chopping flowers like they would do to vegetables. These are used as offerings across various temples by the devotees. All the flowers get distributed across the small and big temples amongst thousands of devotees and are then offered to God. 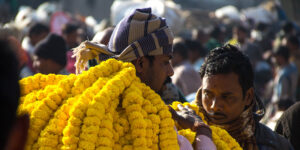 Unlike other days, the marriage dates are very special for the market. If, on a normal day, the turnover of the market is around one crore, then on the marriage days it can easily go up to almost two crore. The Bihari and Marwari weddings see more demand of the flowers and the sales go upto even three to four crore on good business days. Perhaps one of the reasons for the high sales during these weddings is due to the export of flowers to various parts of the country. The supply of flowers is planned as per the wedding calendar.

The common scientific name is Mexican Tube rose but Rajnigandha rules the wedding market just like a Banarasi Saree rules as the costume for the bride as it is very specific to Bengali weddings. The flowers that Nimai supplies to the bigger shops here are woven into garlands. In any wedding, the garland plays the key role with all the rituals involving the bride and the groom. 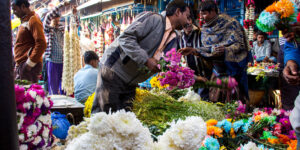 The thickness of the garland and number of roses in them determine the price. Once the flowers are supplied by vendors like Nimai, trained skilled craftsmen deftly weave them into garlands.

Garlands are not the only requirement at the weddings though. There are crowns for the bride which are high on demand and also small bracelets for the groom. Contrary to much popular belief, there is not much demand of flowers for decorations in the weddings any more. Artificial flowers are popular with the decorators as the reusability of these flowers is high. Although once in a while, shop owners come across true connoisseurs of flowers who still prefer the genuine natural flowers.

The wedding season has brought back the smile to the market which was hugely affected due to demonetization. Luckily enough, that was a time window when most of the Hindu weddings did not happen as it was considered inauspicious. Hence, unlike most of the other industries, the impact was not extreme where the markets came to a standstill. However, sales did dip and volume of flowers which got traded was way less. Thankfully now, with the wedding season at peak, things are looking as bright as a marigold – fresh, positive and colourful! Perhaps that’s the reason Nimai Mondal has promised his seven year old daughter Fulia, that at the month end she will get the new crayon set which she has been asking for since a long time.

Mullick Ghat is one of the largest flower markets of India and perhaps, one of the largest in the world. It is a medley riot of colours which acts as the flower supply source to the entire city and nearby areas including the adjoining states. 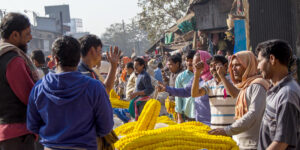 Any market place is a common meeting point between the buyer and the producer and this place is no different. It is a sight to watch so many people earning their livelihood and equal number of people buying flowers. It is not only about the buyers and the sellers, but there are also carriers who will carry your bulk purchase to your vehicle, the tea vendor and the tea shop owners, the plastic carry bag suppliers, the small snacks shop owner who sells hot Samosas (or gorom shingara, as we love to call it) and many more, who all have their livelihood centered around this flower market. 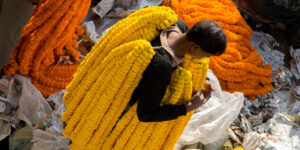 Generations after generations face changes, but the flowers and the market remains in a perpetual state of status-quo and the significance never dies; be it for marriage or for any other rituals.

A digital influencer, a writer and a globetrotter; Anindya S. Basu is more than just a blogger. He is a magsman, who artfully spins his travel experiences with emotions and connections. With a penchant for photography, his sojourns are supplemented with a visual appeal of beautiful images. His award-winning blog, www.pikturenama.com captures the essence of authentic culinary experiences and travel tales.