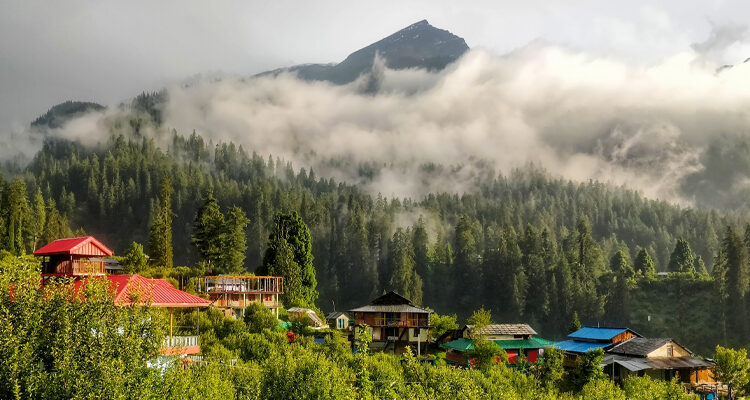 When I arrived in Kalga on a rainy evening in June, the sun was playing hide and seek from behind the clouds. The day was already dark, and I couldn’t see Kalga well. I hadn’t planned my trip and had hitchhiked to Kalga from Shilha village on instinct. In the gorgeous Shilha village music blasts louder than in Delhi weddings.

I got dropped at the Barshaini village, the nearest bus station to Kalga. From Barshaini I clambered up the steep hill on which Kalga is located.

Trudging through the wet apple orchards spread throughout Kalga, I searched a home for the night. It was a Saturday, and I was told that all the wooden houses were booked by tourists visiting from Delhi. I circled around the maze-like soggy mud lanes for hours. And finally ended up at the first guest house at the beginning of Kalga. The manager there offered me a simple room for three hundred rupees a night.

In the next few days, the rain gods and goddesses showered Parvati with torrential downpours. The power went out. I stuck to the dull room and stepped out only to eat. I had tried ordering at the guest house but the all-men team of the place served lunch at dinner and dinner at midnight. On careless occasions I found myself wandering in the pine forests behind the village in slippers. Let me say for the records I never ran back to my guest house while toppling down at least a few times in those undependable flats. Though I couldn’t see or do much for the first couple of days, the lush view kept me enticed. Kalga was prettier than anything I had ever seen.

On one side of Kalga, the Parvati river curls at the base of the mountain on which Kalga sits precariously. Parvati river flows from the Mantalai Glacier below the Pin Parvati pass in the east of Himachal Pradesh to meet Beas river at Bhuntar in the West. On its way, the river carves out the gorgeous Parvati valley. Above the river, the Himalayan mountains rise high. These tall mountains skirt the entire Kalga. Some of the peaks are snow-clad and can be hiked. The paths to the summits goes through the thick pine and deodar forests that fill the slope of the mountain range.

On most rainy days, the peaks would be hidden behind thick milky clouds that hang above the valley for the entire monsoon. The clouds clear up some afternoons only to splatter a thick rainbow above the apple trees and under the inky sky. The landscape becomes believable only in a few days.

The vista from Kalga is like a fairy tale but Kalga is no less beautiful in itself. Villagers told me that Kalga is an orchard land and not a village.

Imagine Kalga as a big neon apple garden with a couple of wooden huts strewn about in between. Some of the locals from the nearby villages who own the apple orchards have built these wooden cottages. Many families stay in these homes while others run the huts as homestays. A few houses lay abandoned, too.

In June, the apple trees were in blossom. Lemon-sized green apples that dotted the trees enticed the visitors to pluck them. But remember, stomach hurts if one eats too many unripe apples.

Kalga is special, and I was soon going to realize that. On a drizzling morning a few days later, I carried my tiny backpack with me while going out for breakfast. I was thinking about leaving Kalga.

A random trail brought me to a peaceful home whose only disturbing element was a roaring generator. The house lady served me a plate of crispy okra and chapati on a bamboo table in the garden. She asked if I would like to see a room on the top floor.

I climbed up the creaky wooden stairs to find myself looking at a quiet room with a king-size bed as its sole furniture. Large glass windows opened on top of apple trees. High mountains sat at a distance quietly. Clouds floated in between the peaks and me. The view was spectacular. The room could have been from a few centuries ago. The fragrance of fresh mint from the kitchen wafted up to my window.

Either I had time travelled or the world had stood still for ages. Needless to say, I took the room and decided to explore Kalga for the next few days. But I spent a little more than a few days there.

My mornings started on the balcony with a tall glass of masala chai and a thick aloo paratha for breakfast. Then I read books, admired the view, looked at the yellow-billed blue magpies that glided around, and chatted with other guests.

The afternoon was spent eating lunch and watching the icy tops of the mountains. More birds joined the magpies in their mischief, and I often found myself jumping from one corner of the wooden balcony to another to see them in action. Masala chai and a sleepy Kindle kept me company.

If it rained, I tuned in to the sound of raindrops spattering on the stone roof and the apple trees. If it was sunny, I would be mesmerized by the rainbows that ribboned the sky. In the evenings, I left everything to return to the balcony. There I would watch the sunset behind the line of mountains that curved around the Parvati river.

Before I could blink my eyes, the evening hues would change from a golden yellow to a bloody red to a lily pink. Irrespective of how many pictures I clicked, I could never do justice to that sunset.

There was nothing to do but still so much to do in Kalga. When I wanted to break the spell, I would walk to the Prem Dhaba in Barshaini. The locals and tourists call the woman who runs the Dhaba didi affectionately, and I caught up with the vernacular in no time. Didi gave a huge meal of chickpeas, rajma, kadhi, sabji, green salad, rice and chapati for 80 rupees only. You got unlimited refills of this simple oil-free meal. Himachal could be heaven for food lovers.

On some days, I joined other travellers from the guesthouse to visit the hot springs of Manikaran village. In Kalga we could only bathe with buckets, and the hot water was only available on a prior request. The day we went to Manikaran was like a picnic for all of us long-term travellers. We would get together in the morning, eat at Prem Dhaba, and then take the bus to Manikaran.

After a few-hour bath in the legendary Manikaran hot water springs and a few cups of tea in its forgotten lanes, we would hitchhike back to Barshaini. Overloaded local HRTC buses were also an option but they stopped running after 5–6 pm. A quick stopover at the Prem Dhaba again, and we would climb up to Kalga to huddle around the fire in the kitchen of the guesthouse. The moon rose high in the sky, and our banter filled the silent nights.

Apart from a few weekends, Kalga was never crowded. On weekends, a long train of tourists (mostly from Delhi) with walking sticks in their hands can be seen plodding towards Kalga to hike further to Kheerganga. Most of the tourists only visit Kalga on their way to Kheerganga, a popular hike that Hindus consider auspicious. But not many people know that one can hike from Kalga to the large open meadows of Bunbuni and descend to Kheerganga from there.

I could not go on all hikes alone. So I was lucky to run into a friendly group at the local grocery store of Kalga. They invited me to join them for a trek to Bunbuni. I accepted immediately. After a long hike lasting for 6-7 hours we were at the top of Bunbuni before sunset. The incessant rainfall and a hail storm hadn’t been able to stop us.

We spent the night at Bunbuni meadows where only a few shepherd families stay in the summer. The open pastures of Bunbuni may never let you leave. There was no phone signal there and all around we saw rolling hills. But with a strong will (and the fact that some of us were worried our families must be trying to reach us), we descended to Kheerganga next morning. That night we stayed in camps near Kheerganga.

Legends say Kheerganga hot water springs is a stream of milk that the goddess Parvati let out to feed the hungry Ganesha.

The next day I arrived back to Kalga in time to witness the majestic sunset again. This time I didn’t click any pictures.

TRAVEL INFO
Kalga (2500 m) is located in Parvati Valley in Himachal Pradesh, India.
How to Reach: First, you have to make your way to Parvati Valley. Kasol village in Parvati is accessible by road from Bhuntar or Kullu in Kullu district, which are in turn connected to many other places. From Kasol, you can take a bus to Barshaini village. From Barshaini, you have to walk and cross the dam over the Parvati river. On the other side of the dam, the hike to Kalga village starts from the base of the hill on which Kalga is located.
The hike is about fifteen minutes to half an hour long depending on the walking speed. Remember that the trail would be slippery if you are visiting Kalga in the monsoon season.
Best Time to Visit: The most popular months to visit Parvati Valley are from April to June. It rains a lot in the Parvati valley, and thus you cannot easily avoid the rain even in April and May. After the monsoon, October and November would be dry but colder.
Accommodation: There are not many places to pre-book in Kalga. You can find a good homestay or hotel by walking around in the village and asking for availability. Most of the rooms cost three hundred rupees per night. Toilets (mostly Indian style) are not attached and are outside the wooden homes.

Priyanka Gupta is an itinerant travel writer from India who left her investment banking career to write and travel. She focuses on culturally immersive travel while relishing local delicacies and never miss a chance to see wildlife. Priyanka always lookes out for sustainable and local community driven offbeat experiences. Read Priyanka’s best life ideas and travel stories on her personal growth and travel blog On My Canvas.

Know When and Where to Watch Lunar Eclipse in November 2021

Ubud: The Heart of Bali