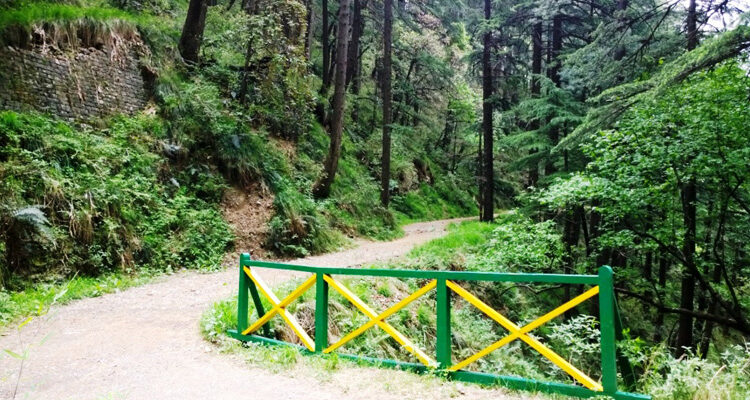 Shimla is one such place in India that constantly keeps receiving all sorts of affection. I have not seen even a single person, man or woman, young or old, rich or poor who does not love Shimla. Especially the old part of the town. The surroundings of Shimla offer such an atmosphere to the visitor or to a local that the person immediately feels revitalized.

A walk through any part of Shimla makes you feel like in paradise. The air, the climate, the foliage, the Victorian villas, the tranquillity, the landscape and the spectacular views all collectively hold the entire credit. Shimla Walks, and literally the whole Shimla walks. There was a time when everyone walked in town. The British built a road called Cart Road, circulating around Jakhu hill which was only meant for traffic. The vehicular traffic, apart from the Jampan Rickshaws was not allowed on any other roads other than the Cart Road. People residing in Boileauganj or in Chakkar to the western end of Shimla walks to their offices at the Mall or in Secretariat. Students walks to their schools and women walks to the bazaar. The practice is still on, but most of the people from the new generation are shedding this habit and switching to wheels.

Shimla offers lovely walking lanes & trails for the walkers, especially for the tourists. While walking on a forested road, you may feel it is too peaceful but the tranquillity of the forest captivates you and welcomes you to its lap.
Although the urbanisation is taking the surroundings of Shimla in its claws, but it is limited only to the sunny areas and the private lands. The forestland is still with the government and the ancients trails are still used by the villagers. Shimla is surrounded by a thick cover of forests where the slopes are dotted with tiny hamlets. The forested trails lead you to some beautiful villages that fascinates you with its stunning views and with the hospitality of villagers.
The best way to explore Shimla is walking through its Heritage Zone. A better introduction about the history of the town is given through this walking trail.
The walk transforms you directly to the bygone era when the town was being built. During the summer months, it was inhabited by the British.

The charm of its past is hidden in its Gothic villas, swaying cedars, hopping monkeys, pine scented climate, crispness in the air and traffic free roads. Some of the buildings are open for the public whereas most of them are worth seeing from outside. A stretch of nearly 6 kms of this walk shows you the true Shimla.

The other option is to walk through a forested trail and enjoy the tranquillity. These trails are regularly being used by the villagers. The forests here are thick and provide shelter to the birds, animals, butterflies and cicadas. The humming sounds of cicadas in these forests are the only disturbance to the silence. There are pathways with loose rocks asking you to step on them carefully. Ferns and mosses along with the other foliage make the forest more attractive. The exposed rocks jutting out of the hillside induce you to learn more about the formation of these mountains.

The sunshine depends upon the face of the hill you are walking on. North face in the Himalaya is always colder than the southern slopes. It is also preferred for its chillness and the views of Himalayan ranges that it offers. The southern slopes are comparatively warm.

A day hike is another option to rejuvenate yourself.
Test your muscles a bit and observe the rhythm of your breath on these slopes. It is promised that once you are on top you will find the view and the hike, both breathtaking. The designated paths to the hilltops are regularly used. You may come across a half-eaten or decayed skeleton of some animal as the forests are the home to leopards, fox, bears, hog deer and a variety of birds. They collectively sustain the eco system of the wild and keep the nature alive.

Go birding with Kunwar Dushyant Singh, a hard core professional naturalist and learn more about the habits of the birds of this area. An early morning visit to his house is the perfect time to see birds. Kunwar Dushyant belongs to the erstwhile dynasty Dhami and lives there in his ancestral house with his wife. A day with him in this Himalayan village adds a special feather to your visit to Shimla. The session of birding is followed by a hearty breakfast at his home cooked by his wife Kunarani Kamlesh Singh. The family has a grand history as they have been great supporters of the British in this area and have earned many titles from them.

After these walks and visits in and around Shimla, you go back with unforgettable experiences and Shimla remains in your memories forever. This time you have seen Shimla from a different angle that will compel you to return and spend more quality time here.

The Beguiling Beauty Of Prashar Lake