Prahlad Singh inaugurates the architectural illumination of the Safdarjung Tomb 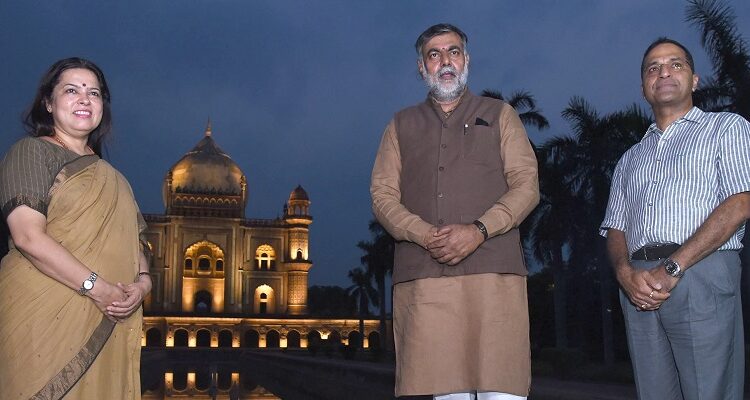 Minister of State for Culture and Tourism (I/C) Shri Prahlad Singh Patel inaugurated the illumination of the historic Safdarjung Tomb in New Delhi on Friday. With the illumination the architectural beauty of the 17th century Mughal era monument will display its historic reflection on Delhi after sunset.

Speaking on the occasion, the Minister said India is full of tourist attractions, where there is a unique blend of cultures, religions and beliefs. Our heritage is our identity, and hardly any country of the world presents such a lucrative mix of a rich and diverse heritage that is so old in terms of civilization. The intimacy between the people of different cultures and traditions has made this unique country ‘India’.

He further said that Ministry of Culture is working in this direction that the youth get an opportunity to know the history and culture of the country better and to encourage the sense of shared identity of ‘Indianness’ among the citizens of our country. Prahlad Singh Patel said over the centuries, this Safdarjung Tomb has been giving testimony of the rich archaeological heritage of Delhi. Today, it is a magnificent example of the Incredible India. I hope that seeing this new innovative form of the Safdarjung Tomb, not only will the local residents be proud of their heritage but will also help in launching our rich cultural heritage on world tourism.

The Minister informed that to highlight the archaeological magnificence of our historical monuments, Archaeological Survey of India has taken up the project to illuminate the important monuments of Delhi. Earlier, the illumination of Red Fort, Humayun’s Tomb, and Purana Qila has already been completed. Qutub Minar and Tughlakabad Fort are also expected to be illuminated in near future.

He further said that continuing its endeavor to promote India’s glorious culture and Heritage, the Ministry of Culture is committed to showcase India’s cultural vibrancy to the entire world. The move to illuminate the historic monuments aims to showcase monuments during late evenings, thereby enhancing the visitor and tourists’ experience.

Patel also informed that to highlight the architectural beauty including arches and minarets of the Safdarjung tomb,a total of 213 technologically advanced LED lights have been used which will consume less electricity – the consumption of which is approximately 62% less than conventional light fixtures. The new architectural lighting will cast programmed light on components such as domes, ramparts, minarets, arches and balconies from different directions to highlight their architectural details. The new illumination comprises of simple yellow and static lighting that accentuates the silhouette of the monument with the interplay of light and shade. The duration of illumination will be from 7:00 PM to 11:00 PM daily with a monthly cost of Rs 8,880/- which comes out to Rs 1,06,560/- for a year.

Safdarjung Tomb is one of those historical monuments which attracts thousands of tourists every year and is the pride jewel in Delhi’s history. The project has been completed by Archaeological Survey of India of Ministry of Culture.