No Goal Is Impossible For Capability Of New India: PM Narendra Modi

Prime Minister Narendra Modi addressed ‘Garib Kalyan Sammelan’ in Shimla, Himachal Pradesh. This novel public programme marking the completion of eight years of the government led by the Prime Minister is being organized across the country at State Capitals, District Headquarters, and Krishi Vigyan Kendras.

PM releasing the 11th instalment of financial benefits under the Pradhan Mantri Kisan Samman Nidhi (PM-KISAN) scheme, during the ‘Garib Kalyan Sammelan’ in Shimla, Himachal Pradesh on May 31, 2022.

Shimla: Prime Minister Narendra Modi addressed ‘Garib Kalyan Sammelan’ in Shimla, Himachal Pradesh. This novel public programme marking the completion of eight years of the government led by the Prime Minister is being organized across the country at State Capitals, District Headquarters, and Krishi Vigyan Kendras.

The Sammelan conceptualizes elected public representatives across the country directly interacting with the public to get feedback about the various welfare programmes being run by the government.

The Prime Minister also released the 11th installment of financial benefits under the Pradhan Mantri Kisan Samman Nidhi (PM-KISAN) scheme. This will enable the transfer of an amount of around Rs. 21,000 crore to more than 10 crore beneficiary farmer families.

On this occasion, the Prime Minister also interacted with the beneficiaries of (PM-KISAN) across the country. Governor of Himachal Pradesh, Rajendra Arlekar, Chief Minister of Himachal Jai Ram Thakur, and Union Minister Anurag Singh Thakur were among those present on the occasion in Shimla.

Interacting with the beneficiary from Ladakh, Tashi Tundup the Prime Minister talked about the arrival of tourists in Ladakh and his experience with the government schemes. The Prime Minister praised his services as an army man. Tashi Tundup said that he did not face any problem in availing the benefits of schemes like PMAY, Toilets, Gas Connections, and farming-related benefits.

Lalita Devi from Bihar is a beneficiary of PMAY, Ujjwala, Swachh Bharat, and Jal Jeevan Mission. She informed the PM, how schemes led to her ease of living and dignified life. The Prime Minister said that with a house many things like education and marriage of the children will fall in place.

From West Tripura, Pankaj Shani, the beneficiary of Ek Rashtra Ek Rashan Card, PM Garib Kalyan, and many other schemes informed that he got the benefits of many schemes like JJM, ONORC, PMAY, and electricity connection. He also informed that due to the One Nation One Ration Card he is not having any problems despite his migration from Bihar.

From Kalburgi of Karnataka Santoshi, a beneficiary of Ayushman Bharat narrated her experience with the scheme. She said that the Health and Wellness Centre and free checkups and medicines are bringing many changes in her life. The Prime Minister complimented her for her excellent way of communicating and joked that she should contest elections as she will be very popular.

From Mehsana Gujarat, Arvind, a beneficiary of PM Mudra Yojna was elated to talk to the Prime Minister and informed that his Mandap Decoration business has led to the expansion of business and he is promoting digital payment. The Prime Minister complimented him for educating his employees about the government scheme and also for being a job creator. The Prime Minister also blessed his daughter for sporting aspirations.

Addressing the gathering, the Prime Minister expressed his happiness to be present in Himachal on this momentous occasion. He congratulated and wished the farmers as more than 10 crore farmers have received the money in their bank accounts through the PM Kisan scheme.

He expressed satisfaction that he released benefits under the PM CARES for Children Scheme on the occasion of the completion of 8 years of the Government. He expressed happiness for releasing the financial benefits under the Pradhan Mantri Kisan Samman Nidhi (PM-KISAN) scheme nationwide from Shimla. He thanked the people for giving him the opportunity to serve 130 crore citizens.

Also read: Natural Farming Can Give New Footing To Tourism In Himachal Pradesh

The Prime Minister also conveyed his satisfaction on marking 8 years by taking up the responsibility of the children who lost both their parents to the Corona pandemic through PM CARES for Children yesterday. He said that the suggestion to be in Himachal for this occasion was accepted by him with promptness as the State has been his Karmbhoomi.

An emotional Prime Minister said, “Getting connected with the hopes and aspirations of my family of 130 crore citizens, this family is all I have, you people are everything in my life and this life too is for you.” The Prime Minister said as the government is completing its eight years, he repeated his resolve again that he will do whatever he can, for the welfare of everyone, for the honour of every Indian, for the security of every Indian, and for the prosperity of every Indian for them to get a life of happiness and peace.

The Prime Minister lamented that before 2014, the earlier government had considered corruption as an essential part of the system, then instead of fighting corruption, the government had succumbed to it, then the country was watching that the money for schemes was looted before reaching the needy.

He added that today due to the trinity of Jan Dhan-Aadhaar and Mobile (JAM), the money is reaching the beneficiary directly in their Jan Dhan bank accounts. Earlier there was a compulsion to suffer smoke in the kitchen, today there is a facility to get LPG cylinders from the Ujjwala scheme.

The Prime Minister noted that the welfare schemes, good governance, and welfare of the poor (Seva Sushasan aur Gareeb Kalyan) have changed the meaning of government for the people. Now the government is working for the people. Be it PM housing schemes, scholarships, or pension schemes, with the help of technology, the scope of corruption has been minimized.

He said that the Government is trying to give a permanent solution to the problems which were earlier assumed to be permanent. He said Direct Benefit Transfer put an end to the injustice of pilferage and leakage by removing 9 crore fake names from the benefit rolls.

The Prime Minister said when the daily struggle of the poor has reduced when he is empowered, then he gets involved with new energy to remove his poverty. With this thinking, our government started empowering the poor from day one. We tried to reduce every single worry in his life, he added. “I can say with pride that almost every family of the country is benefitting from one or the other scheme”, he said.

Noting the contribution of every family of Himachal to the armed forces the Prime Minister said it is this government that implemented One Rank One Pension after waiting for four decades and gave arrears to the ex-servicemen. Every family of Himachal has benefited a lot. Vote bank politics has happened in our country for decades and has done a lot of damage to the country. He said we are working to build a new India, not a vote bank.

The Prime Minister said we have taken the initiative to make 100% benefit reach 100% of the beneficiaries. He said the Government has taken a pledge for reaching the saturation of the beneficiaries. 100% empowerment means ending discrimination, eliminating recommendations, and ending appeasement. 100% empowerment means that every poor gets full benefits from government schemes. 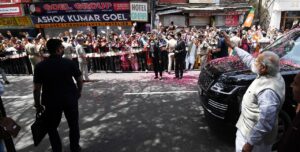 Commenting on the growing stature of the country the Prime Minister said today, India does not extend a hand of friendship in compulsion but extends a helping hand. Even during the Corona period, we have sent medicines, and vaccines to more than 150 countries, he added.

The Prime Minister stressed the need to work for the bright future of the coming generations, for the bright India of the 21st century. An India whose identity is not deprivation but modernity. No goal is impossible in front of our capability. He added that today India is one of the fastest-growing economies in the world. Record foreign investment is happening in India today, today India is also creating records in exports. “All should come forward and play our part in the journey of progress of our country”, he concluded.