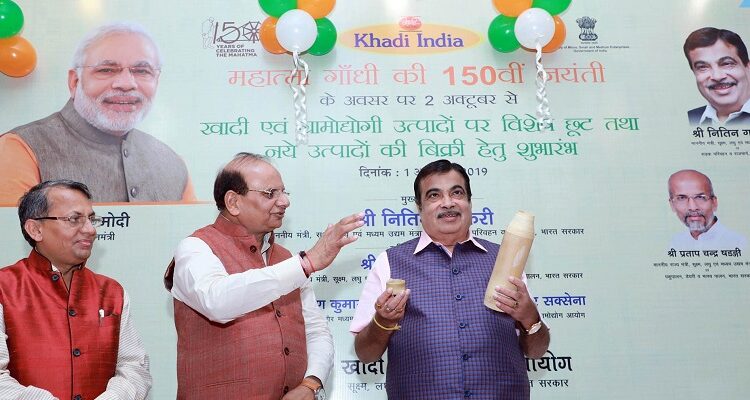 Delhi: Union Minister for Micro, Small and Medium Enterprises and Road Transport & Highways Nitin Gadkari launched new KVIC products and a special sales campaign in New Delhi today, on the eve of 150th Birth Anniversary of Mahatma Gandhi. He launched a bamboo bottle of 700ml to 900ml capacity made by a Tripura based organization, which is being seen as the perfect replacement of plastic bottles as it is natural, cost effective, attractive and most eco-friendly. He also launched low priced sanitary napkins developed by Ladlee, a new soap and kachchi ghani mustard oil. 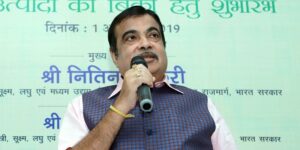 Remembering the Father of the Nation on the eve of his 150th birthday, Gadkari said that khadi and village industries were very close to Gandhi ji’s heart. He said Gandhian economics emphasizes on maximum production with involvement of maximum number of people, and the Government of India is sincerely working to fulfil his dreams. The decision to serve tea in kulhads on 400 railway stations, distribution of tool kits to leather artisans are all steps in this direction, he said. The Minister also emphasized the need to modernise Khadi products to make them more attractive to the youth, and said the Ministry and KVIC are collaborating with reputed designers in this regard. 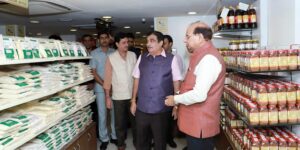 Gadkari appreciated the efforts made by Khadi and Village Industries Commission (KVIC) in developing new products which are eco-friendly, cost effective and good for health and environment. He expressed hope that this year KVIC will break its own record of single day sale of Rs. 1.25 Crores which happened on 13th October 2018.

KVIC chairman Vinai Saxena said KVIC is in the process of reviving village industries. The Kacchi Ghani mustered oil launched today is being supplied by a Prime Minister Employment Generation Programme (PMEGP) unit established recently near Jaipur. The cost effective sanitary napkins are manufactured in Chandigarh also by a PMEGP Unit. He informed that the annual turnover of KVIC is approximately Rs. 3,000 crores and they are pushing to take it to Rs 5000 crores in the coming years.

In observance of 150 years of Mahatma Gandhi, KVIC, for the first time, is giving 40% discount on Gandhi Topi and Gandhi Dhoti and 20% discount on all village industries products which will be applicable from 2nd October for 40 days.