Jabalpur may not be very noticeable on the tourist map of India but it is a place that can leave you spell-bound. It is enriched by the Narmada valley; has been given its greenery by the dwarf hills that surround it; and its black cotton soil has made it a granary of Madhya Pradesh.

by The Traveller Trails
in Travel
Reading Time: 4 mins read
1

Want to see our own Niagara Falls?
Go to Jabalpur.

Wish to feel the awe of the green fathomless waters and the might of River Narmada?
Then go to Jabalpur.

Are you keen on visiting a temple devoted to the 64 Yoginis?
Again Jabalpur is the place you must go to!

That says it all. Jabalpur may not be very noticeable on the tourist map of India but it is a place that can leave you spell-bound. It is enriched by the Narmada valley; has been given its greenery by the dwarf hills that surround it; and its black cotton soil has made it a granary of Madhya Pradesh.

The rock-edict of Rupnath belonging to the reign of Ashoka trace the history of Jabalpur to about 272 B.C. when it formed the Southern part of Ashoka’s empire. A pillar found in Allahabad of the period of Samudragupta (320 A.D.) records of his conquest of some of the tribes of the area.

For a long time it was ruled over by the Kalchuri dynasty. Numerous inscriptions belonging to the Kalchuri kings establish the genealogy of these kings from Kokalla I (875 A.D.) to Kokalla 15, the last Kalchuri king (1180 A.D.). The Gonds assumed power in the 15th century with Samgramshah as the first Gond ruler who built fortresses, temples and dams. 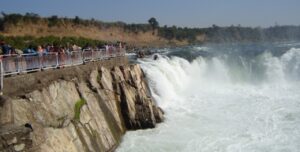 History apart, the tourist attraction of Jabalpur lies in its Marble Rocks and the torrential waterfall called Dhuandhar. The marble rocks are at Bhedaghat where they rise to a hundred feet on either side of the Narmada.

The water looks still, green and foreboding. The small and old canoe-type ferryboats look quite rickety but they take you on a round amid the whispers of the waters and the comic stories of the tourist guide who is also your boatman.

As you sit with other tourists they entertain you with their typical rhetoric on the Rocks, the significance of the river, its depth and the stories and legends associated with it; and you land back safely not knowing how those twenty minutes of your trip flew past.

The Rocks are a marvel of nature. Jagged at places, inhospitable, awe-inspiring, yet serene and lovely, they lend a cool charm to the entire scene. In sunlight, they present myriad hues, on moonlit nights they sparkle with the tranquil beauty of the Taj in water. 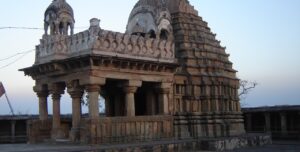 Captain J. Forsyth describes the enchanting beauty of the expanse of water enclosed within the rocks thus: “The eye never wearies of the effect produced by the broken and reflected sunlight, now glancing from a pinnacle of snow-white marble reared against the deep blue of the sky as from a point of silver; touching here and there with bright lights the prominences of the middle heights; and again losing itself in the soft bluish gray of their recesses.”

Slowly you move towards the highest rocks, they are so narrow at the top that it is called Bunder Kudi ( a place from where monkeys could jump from top to top), you feel the impact of the still water, more than 450 ft. deep.

The rocks display different colours – pinkish-white, gray-blue, deep gray and off-white. The guide shows you some imaginary figures, which with childlike credibility, you tend to believe in. One of their favorites is the figure of two children fighting and another, of a Sadhu sitting high up on the peak in meditation.

Then the guide points out to some dreary, mossy and unfathomable spot as the ‘headquarters’ of the crocodiles. Quite fear-evoking! And then, the guide opens up the glittering world of films, telling how a certain hero fought on the rocks with the villain and saved the heroine—believe him if you wish, but the rocks look too slippery and unapproachable for humans to reach. On your way back buy some soft stone items from the shops that line the approach to Bhedaghat. 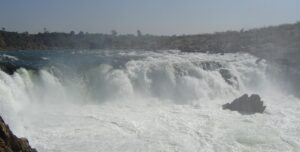 From here, the next spot is the Dhuandhar. Here, the river makes its way through the marble rocks, narrows down and then plunges in a waterfall. So great is the impact of the mass of torrential waters that the fall produces smoke-like spray and hence the name ‘Dhuandhar’ – the smoke cascade.

The roar of the waterfall can be heard from a distance but it is rewarding to go near the falls, witness the spectacle of nature’s power, feel the spray on you and marvel at the scenic grandeur when the rays of the sun produce a rainbow. It is our Niagara Falls, indeed. 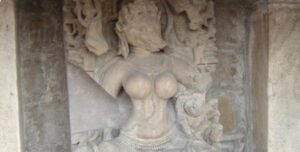 Driving back from Dhuandhar, stop at the ‘Chausat Yogini Temple’. Situated atop a hill, this temple is dedicated to lord Shiva and there are sixty-four Yoginis around the outer wall.

Chausat Yogini Temeple was built in the 10th century and has beautifully carved stone figures of deities. There are two interesting and rare things about the temple: first, the outer boundary is circular in shape and second, the main sanctum has a unique idol of Shiva and Parvati riding the Nandi. From the hillock you get a panoramic view of the vast rocky terrain, the river flowing through the jagged Marble Rocks and the sprawling city spread before you.

The Madan Mahal Fort atop a rocky hill, the Sangramsagar and Bajnath Math, The Rani Durgavati Memorial and Museum and the Tilwara Ghat where Mahatama Gandhi’s ashes were immersed in Narmada are other attractions. Kanha sanctuary and Bandhavgarh National Parks too are conveniently approachable.

The Magic Of Mangalajodi: From Poachers To Protectors