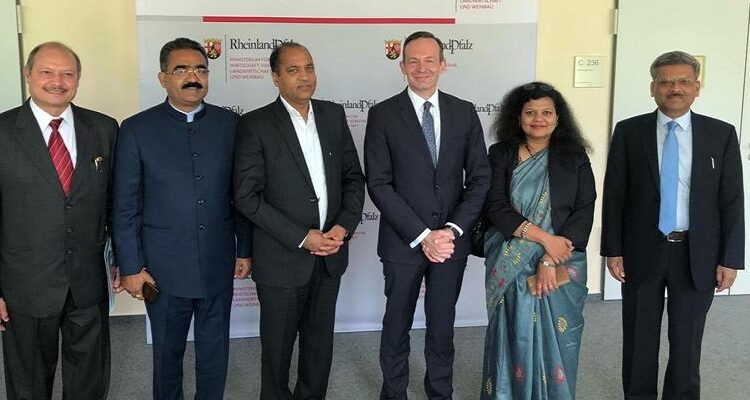 Chief Minister Jai Ram Thakur today met Minister for Agriculture, Tourism, Transport and Viticulture (wine making) for the State of Rhineland, Germany Dr. Volker Wissing at Frankfurt as a part of the outreach activity for attracting investments to Himachal Pradesh. Chief Minister apprised the Minister that there was a vast potential of investment in various sectors such as Agriculture, Tourism, Transport and Infrastructure.

Jai Ram Thakur invited the minister to participate ‘Global Investors Meet’ to be held at Dharamshala in Himachal Pradesh with Government-cum-Business delegation from Rhineland to the event. The meeting was a great success.

Dr. Wissing evinced keen interest to enter into a memorandum of understanding with the Himachal Pradesh for possible collaborations. He also extended an invitation to the Chief Minister to visit Rhineland again for having a better understanding of the technology used by Germany for creating sustainable and world-class infrastructure.

Earlier, on his arrival at Frankfurt Airport on Monday, Consul General of India at Frankfurt Pratibha Parkar received the Chief Minister and others.

CM In Germany, Invites Entrepreneurs To Invest In Himachal