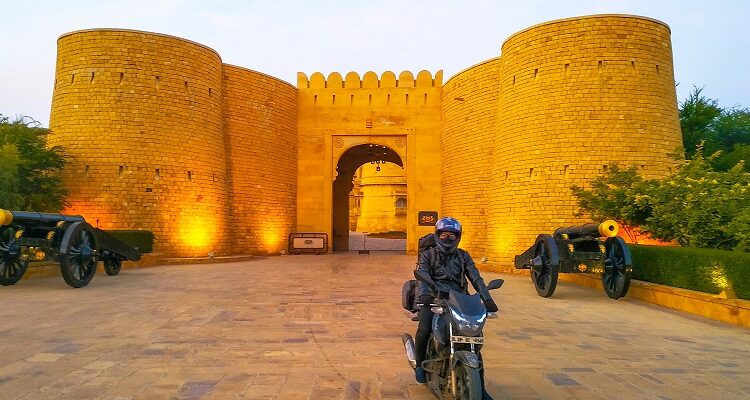 It is not always that one gets the opportunity to turn the new year weekend into a grand trip. But to welcome 2020, I had the exact plan and opportunity. Earlier I had travelled to Jaipur and Ajmer in Rajasthan. This time I had two options – the Jaiselmer-Longewala circuit or the Udaipur-Chittorgarh circuit. While the City of Lakes (Udaipur) was something I always had on my list, visiting the border and traversing central and North-West Rajasthan seemed more appealing in the moment and I chalked out a rough 7-day itinerary:

Delhi to Jaipur was a breeze! With just one break at McD, Manesar for breakfast, we reached Jaipur flat-out within 5 hours of riding time.

As the customary tourist hangouts of Jaipur like Amer Fort, Albert Hall, Hawa Mahal, Jal Mahal, City Palace, Jantar Mantar were already explored by us previously, we settled to give Nahargarh Fort a visit before the evening set in and tasting some delicious malai ghewar at Laxmi Mistaan Bhandaar sweet shop. The fort staff starts wrapping up after 5 and closes by 6. So it’s a prudent thing to explore the fort first and then hang back to enjoy view of the city underneath shrouded in colorful lights. We called it a day after having some mouth-watering chicken cuisine at Taxi Chick-Inn near the Sindhi Camp Bus Stand.

On day 2, we set away from Jaipur at a leisurely pace at 11AM with the target of reaching Bikaner by late noon, a distance of roughly 350 kms amidst the Thar desert. It took us approximately 6 hours/ 400 kms via Sikar bypass to reach Bikaner which features tourist attractions like the Junagadh Fort and the Karni Mata Temple nearby.

Day 3 we had the steep target of traversing near 500 kms to reach Tanot Mata Mandir, a border area from Bikaner via Pokhran Bypass-Jaiselmer-Ramgarh. The highway was straight and unbroken. We initially were confused on whether to go via Jaiselmer (Phalodi-Ramdevra route) for Tanot or bypass it (Bhadariya-Mohangarh route). But on hearing that we might need permits to visit the outposts of Tanot and Longewala, we decided to ride via Jaiselmer while inquiring at the BSF Headquarters for permits.

As luck would have it, at the BSF HQ we were informed that permits for the forward areas aren’t being provided by the BSF since about 6 months now and that we could easily visit the tourist areas of the region without any permit. As we made a late exit from Jaiselmer, the sun started sinking in the West. To our company were the huge wind-mills dotting the landscape and the occasional car/ jeep mostly going towards Jaiselmer. We reached the decrepit town of Ramgarh, which was the tactical retreat option provided by Battalion HQ to Maj. Kuldip Singh Chandpuri in the Indo-Pak battle of 1971 at Longewala. It was already 7PM and darkness had descended. We had a simple dinner at Ramgarh and decided to continue on to Tanot to spend the night there as it was only 50 kms away. The night ride under the stars was an exciting one; our headlights were the only visible source of light till far off. We reached Tanot by 9 PM and upon furnishing valid ID was given sleeping quarters in the BSF operated shelter.

An aarti takes place at the temple at 5 AM in the morning organized by the BSF. People from afar through Tanot to witness the aarti. Soon thereafter soldiers start their daily parade, especially so if a dignitary is visiting.
On day 4, after we were done exploring the Tanot Temple, we set off for Longewala at a leisurely pace since we didn’t have to cover much. The road leading away from Tanot towards Longewala was a sandy one and broken at many places. It gradually widened with sweeping curves and steady inclines at places. With nothing but the desert at both the side of the road, riding was exhilarating as we could feel the sets of the Border movie which showcased the Battle of Longewala in 1971. We reached the Longewala outpost soon enough as its distance from Tanot was only 50 kms.

The Longewala War Museum was thronging with tourists. It televises a special show on the war for tourists. The museum contained detailed prints of the landscape, war time weapons of both side and the valiant deeds of the war-heroes like Maj. Kuldip Singh Chandpuri, Subedar Rattan Singh, Sepahi Jagjit Singh and Mathura Dass, all from the hallowed 23 Punjab Regiment.

Surveying both the insides of the museum as well as the external outpost area which had so many remnants from the 1971 War was a roller-coaster experience and felt as if we were part of the history. The Soldier’s Plea and the Officers Prayer illustrated on milestones in the site was an emotional moment as well as a thankful one.

Done with exploring Longewala, we set off for Jaiselmer as we planned to celebrate the New Year’s eve there. However, we also wanted an experience of the sand dunes Rajasthan is so well known for. Accordingly, we took the road from Longewala leading to the much acclaimed Sam Sand Dunes at about 120 kms and only 45 kms from Jaiselmer. The Sam sand dunes are one of the most authentic desert dune site in whole of India, where once can find 30-60-meter tall sand dunes. The color of the sand is so bright and fine that it is described as “golden”. If you are an adventure lover, you must not miss this tourist attraction. Booking in advance might be a good idea since tourist throng this site during holidays and busy seasons. 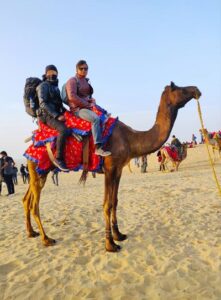 After taking a camel ride through the dunes of Sam, we set off for Jaiselmer by dusk. Finally, we felt we were back to the mainland. First thing to visit in Jaiselmer was the Jaiselmer Fort aka the Sonar Quila because of its honey-gold hue and being at the crossroads of important trade routes including the ancient Silk road.

The Jaiselmer Fort is a huge structure and is considered as one of the very few “living forts” since the old city’s population still resides within the fort. When it was constructed 800 years ago, the fort was the city of Jaiselmer itself. As population grew, the first settlements sprang up outside the fort walls. Built in 1156 AD by the Bhati Rajput ruler Rao Jaisal, the name of the fort and subsequently the city originates from the ruler’s name himself.

Next up on my list was the grand Jaisalmer War Museum – located 10 kms from Jaiselmer on the Jaiselmer-Jodhpur road. The well maintained humongous museum was a delight to visit because of the sprawling landscape which had enemy tanks and fighter planes displayed all over it in an utmost organized manner. Paying silent tribute to the sacrifice of the brave jawaans during the 1965 and 1971 war stands a giant bayonet at the center of the site. It is apt to say that this bayonet, cast in steel, represents the steely sense of duty and commitment of every soldier to our great army.

Day 5, i.e. the new year day ended with wrapping up all sightseeing in Jaiselmer and setting off for Jodhpur via the Barmer route. I could not wish for a better start to the new year, with the first day spent on the riding the highways. Setting off from Jaiselmer by 2PM, I reached Barmer at a distance of 150 kms by 4:30 and after climbing Fort Barmer, resumed ride to reach Jodhpur by 8:30 in the evening. About 360 kms done in 6.5 hrs of riding. The next day was gonna be huge as I had earmarked the first half of the day to explore Mehrangarh Fort in Jodhpur.

The first view of Mehrangarh filled me with awe. Not for nothing, the hulking red sand stone fort which was built 410 feet above the city is counted amongst one of the largest forts in India. The sheer ruggedness and colossal size of the fort amazes you with its architectural prowess and natural defense. Mehrangarh (Fort of the sun) has been the headquarters of the branch of Rajput clan known as the Rathores.

Mehrangarh preserves in its museum many priceless relics of the erstwhile Indian courtly life. A fort like Mehrangarh was an object of great power and prestige; in today’s terms it would be rather like owning an aircraft carrier. Its uses, perhaps, were somewhat more varied; it was not just a military base, but also a palace for the rulers and their wives; a centre of patronage for the arts, music, literature; and with its many temples and shrines it was also a place of worship. These diverse uses are reflected in many buildings within.

Ending Day 6 on a high after exploring Mehrangarh and Jodhpur, Day 7 involved riding back to Delhi from Nagaur via Salasar. On the ending lap of the journey, I ensured not to miss the Nagaur Fort. A considerably smaller fort with some very helpful staff, I would have preferred if the fort was maintained or decked up better. Irrespective, the Nagaur Fort should not be missed if you are visiting Nagaur.

Reaching Delhi by the end of Day 7, I clocked a total of 2500 kms approximately while using up 70L of fuel. A memorable trip which shall be enshrined in the memory with the pleasant experience that Rajasthan had to offer!

Suraj ‘Sufi Traveler’ Dutta likes to think of himself as an avid traveller with a sweet tooth for trekking to less explored trails. A lawyer by profession, he was introduced to the unlimited vistas of travelling by means of long distance biking expeditions. Solo biking till date remains his preferred means of travelling and he considers the Enfield Thunderbird as his most prized possession. Trekking to the Everest Base Camp remains at the top of his to-do list.