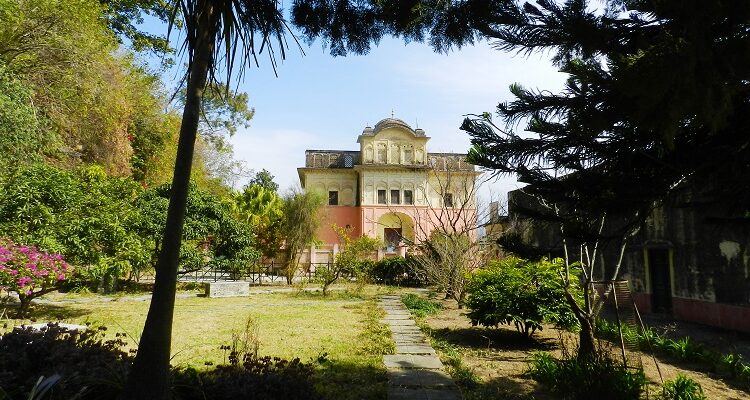 Himalayan paintings are largely religious and express the faith and ideas of the people. Himalayan art and culture have in fact a blending of both Hinduism and Buddhism. Different surveys in this regards reaches the conclusion that the feudal princes of the little hill state of the 17th and 18th centuries, in the valley of Himachal Pradesh between Yamuna in the east and Ravi in the west, have left us a rich treasure of Pahari paintings. 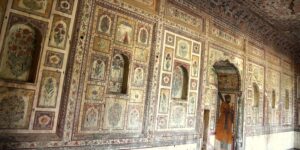 Dr G Archer, Dr MS Randhawa, Karl Khandalavala and Dr BN Goswany have done a great service to the Pahari paintings by tracing the family of historians and different styles of many unknown painters. The earliest known painter who was famous in hilly paintings was Pandit Seu, who was settled in Guler. The origin of Pahari School is supposed to be Guler. In 1780, when the Guler school was at its youth, it was introduced to Kangra and since then, it is known as Kangra Kalam. Paintings of the Himalayan hill states such as Kullu, Guler, Chamba, Mandi, Bilaspur, Kangra and Arki are given the generic name, ‘Pahari Art’.

Arki paintings portray a magnificent history of Indian art. It is hard to believe, that a small region in the Shiwalik range of Himalayas, ‘Arki,’ is home to such a glorious past. Arki, the capital of Baghal state in Shimla hills was also a centre of Pahari paintings. The Bashloli School of paintings exercised influence over Arki School too. But soon Kangra style was adopted. The paintings of Arki deal with the legends of Lord Krishan, Ramayana, Shiv-Parvati strips and Nayak-nayika themes of Rasikpriya or Keshavda. 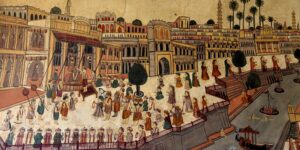 Literature reveals that one of the earliest accounts of Arki paintings was by JC French in his work on Himalayan art (1931). He visited Arki in October, 1929 and described the beauty of the Diwankhana (audience hall). His work is very interesting, as a modern rendering of the old art.

Dr MS Randhawa, visited Arki in 1958 and 1962 and published an article “The paintings from Arki’’ in Roop Lekha, no.1 (1961) and one another article “Eight Nayikas from Arki” in the Times of India in 1962. He also traced the development of Arki school paintings in ‘Travels in the Western Himalayas’ under the chapter “The Painted Palace”. The paintings of the eight nayikas are the most refined in collection of the Raja of Arki. 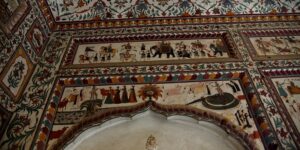 THE FRESCOES IN THE DIWANKHANA WERE PAINTED DURING THE RULE OF KISHAN CHAND NEAR ABOUT 1850 AD THEY ARE IN KANGRA STYLE AND ARE IN A FAIRLY GOOD STATE OF PRESERVATION. THE ROOF HAS A FLORAL DESIGN IN WHICH PARROTS ARE INTERSPERSED WITH LEAVES AND FLOWERS.

On the walls are paintings of Puranic themes and contemporary life. In a mural, a battle between the Sikhs and Mughals is shown. The battle of the Mahabharta with the Kauravas and Pandvas is shown in one another panel. There is also a delightful representation of Kalidasa’s Kumarasambhava. Shiva is in penance and Kamadeva, the God of love, is shooting an arrow at him from a tree. As he appears on the scene, he shoots his love-arrows everywhere. Another panel shows a scene from Ramayna, viz., the monkey’s crossing over to Lanka over a bridge of stones. Gaddi shepherds laden with their belongings are followings their goats carrying panniers of salt, while the Gaddi dog follows the flock of sheep. 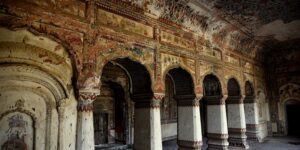 With the rise of the Sikh powers in the Punjab and extension of Sikh influence in the hill states, we find a change in the style of painting. This influence is clear from the portrait of Raja Dhian Singh (1878-1904 AD), in which he had an untrimmed flowing beard in the Sikh fashion.

Arki can be visited from Shimla which is 40 kms. Other than Arki Fort, different caves like Luturu Mahadev and Muturu Mahadev, old temples, Arki bazaar, are the prime tourist attractions of Arki.