Have you ever dreamt of enjoying warm sunshine, getting lost in the mists, shivering in the cold and soaking in heavy downpour – all on the same day? Mother Nature will fulfill your wish in these two hill stations of Tamil Nadu. 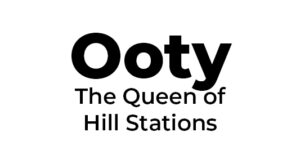 Ooty is one of the most sought after tourist destinations of South India. Its blue mountains with lush green carpet of vegetation, gushing streams and stunning landscape make it a paradise on earth and indeed the ‘Queen of Hill Stations’.

Ooty is located in the Western Ghats at an altitude of 2240m and is also the headquarters of the Nilgiris district. Many centuries ago, it was also called as Oththai-Kal (single stone) Mandu (Mund is the name of a Toda village). The British started calling it as Ootacamund. Toda tribals are said to have lived in Ooty long before anybody dared to venture into this region. Even the great Southern Dynasties were unaware about it. The British ventured into this area during the early 1800s. This was the Summer Capital of the Madras Presidency during the British Rule.

The Government Botanical Gardens is one of the best attractions of Ooty. William Graham McIvor was the architect of this large garden. It was laid out in 1848, in a 22 hectares area along the slopes of a hill at an elevation of 2400-2500 meter above mean sea level.

The Government Botanical Gardens were established by European residents for the purpose of supplying vegetables at a reasonable cost. It is divided into six different segments namely Lower Garden, New Garden, Italian Garden, Conservatory, Fountain Terrace and Nurseries. Well maintained lush green lawns, exotic and rare species of flora are a treat to the eyes at this park. The Cork tree, the paper bark tree, monkey puzzle tree, and a 20-million-year old fossilized tree, Italian style garden bordering a clear pool, many varieties of flowering bushes and plants, fern house with a vast range of ferns are some of the must-see spots in the garden. A Flower Show of rare plant species is held every year in the month of May here.

Another major attraction of Ooty is the Rose Garden situated on the slopes of the Elk Hill, in a five terrace layout. It was established to commemorate the Centenary Flower Festival in 1995. It has nearly 20,000 plants from 2241 varieties of flowers. It has received the Garden of Excellence Award for being the best rose garden in South Asia from the World Federation of Rose Societies in May 2006 at Osaka, Japan. It is one of the 35 gardens worldwide to have won this award.

Ooty lake was constructed by John Sullivan, the then Collector of Coimbatore in the year 1824. Boating in the lake during different times of the day is a thrilling activity for tourists of all ages. A sudden downpour during boating in this lake is a surprise gift.

If you want to get drenched in a sense of adventure during the winter months, head straight to the Pine Forest. An umpteen number of soaring pines, fresh air, picturesque views of the mountains all around, with mist rising on all sides, make it a must visit spot in Ooty. When fog envelopes the entire area, it looks like a scene out of thriller movie. If you are fortunate enough, you might be rewarded with sightings of deer, bison, monkeys and a variety of colorful birds. On heading downhill, there is a lake stretching towards the bottom of the hill, which is also a great place to relax and mingle with nature.

Located on the fringes of the Ooty Lake, in an area of 22 acres landscape is the Deer Park. One of the high altitude animal parks in India. It offers a unique opportunity to observe and study wildlife in its natural habitat.

AROUND OOTY
There are a number of interesting tourist locations around Ooty. Among them Doddabetta (meaning a big mountain, 7kms from Ooty) is the highest peak located at 2634m in the Nilgiris, at the meeting point of Western and Eastern Ghats. Dense sholas surround Doddabetta and offer beautiful views of the Nilgiri Hill ranges. The Telescope House set up by the tourism department helps the visitors to view the entire district from this point.

21kms from Ooty on the Mysore Road, one can visit the Pykara Lake and Water Falls. Fenced Sholas, Toda settlements, undisturbed grassy meadows, wildlife, waterfalls and boat houses are prime attractions of this area.

Many tourists prefer to reach Ooty by Nilgiri Mountain Train, which connects Metupalyam to Ooty. The Nilgiri Mountain Railway was built by the British in 1908 and offers one of the most picturesque journeys enjoyed by people of all age groups.

In the year 2005, UNESCO declared the Nilgiri Mountain Railways as an extension to the World Heritage Site of Darjeeling Himalayan Railways. Vintage steam locomotive is still relished as an exotic attraction to this train. This train covers a distance of 26 km, travels through 208 serpentine curves, 16 tunnels, 250 bridges, waterfall hood, cliff edges and Tea Estates. The uphill journey lasts almost 4 hours. 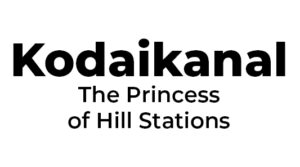 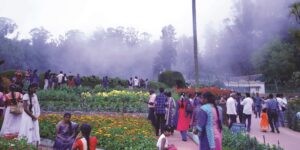 Green meadows, long stretches of forest, woods, mighty rocks, creeks and slopes charm the tourists at Kodaikanal. Legend says that once Lieutenant Ward, an Englishman climbed up from the Kunnavan village of Vellagavi to Kodaikanal in 1821 for a survey of Mountain Ranges of Palani. 13 years later, J.C Wroughten, the then Sub-Collector of Madurai and C. R. Cotton, Member, Board of Revenue – Madras Presidency climbed the hills from Devadanapatti and built a small bungalow at the head of Adukkam pass near Shenbaganur. However, it was the visit of Dr Robert Wright in 1836 and his observations about the Hill Station that attracted Botanists to Kodaikanal.

The Kodaikanal Lake, spanning across 24 hectare area and skirted by a 5km long black tar road, is the prime attraction of the hill station. It was completed in 1863 by Sir Vere Henry Levinge, the then collector of Madurai. It is a beautiful lake at any time of the day, but if you want to enjoy its real beauty, do visit it in the early mornings or late evenings when it is shrouded in mist and offers a dreamy experience. It is once in a lifetime experience to enjoy boating in this lake and get drenched in the rains. You can hire a bicycle and enjoy a ride around the circumference of the lake or take a horse ride. Or just relax watching the floating boats and forget how time flows by.

Situated on the eastern side of the lake is Bryant’s Park. It was conceived and landscaped by H.D.Bryant, a British officer in 1908. It is home to thousands of rose varieties, shrubs, cactus and other trees. The Bodhi Tree is a special attraction. Buddha is said to have meditated and got enlightenment under the species of this Bodhi Tree. There is also a Eucalyptus Tree which is more than 170 years old that steals the show.

Er Coaker identified a hill edged pathway in 1872 and the Coaker’s Walk is named after him. It runs along a steep slope on the southern side of Kodaikanal, and offers best views of the plains around.

The Kurinji Andavar Temple (3kms from lake) is a famous shrine dedicated to Lord Murugan. The temple is associated with the Kurunji flowers that blooms once in 12 years. Kurunji means the hill region in Tamil literature and andavar means God. Hence Lord Murugan is worshipped as the God of the Hill. On the way to the temple, one can also visit the Chettiar Park (2 km away) tucked away in the north eastern corner.

The 150-year old La Saleth Church (near Coakers’ Walk) is one of the two shrines (the other one being in France) dedicated to Our Lady of La Saleth. An annual celebration takes places here on the 14th and 15th August every year as the conclusion of a nine-day festival, which attracts worshippers from entire South India.

For those of you who love to spend some time in the lap of history along with serenity, away from the madding crowds, the best option is the 125-year old Shenbaganur Museum of Natural History. It has an incredible collection of taxidermy of over 500 species of insects, birds, and animals for tourists to explore. It has a good collection of exotic orchids of more than 300 species. The repository has a variety of specimens of various wildlife creatures like snakes, moths, mammals, and butterflies that give tourists informative knowledge about their life cycle which also serves as an archaeological treasure and boasts of a coin collection.

Both Ooty and Kodaikanal are raw slices of heaven waiting to be explored in your next holidays.

It’s All about Sustaining in this Phase of Uncertainty