While strolling on the famous Ridge in Shimla, one comes across an isolated pinnacle which is clearly visible just behind village Mashobra. Shali Peak is highest hiking peak in the close vicinity of Shimla town. Crested with an ancient temple dedicated to Goddess Kali, the hike to the top is a memorable Himalayan experience.

Being the most revered Goddess, Kali is worshipped in the state of Himachal Pradesh, and devotees throng to the Shali top in the months of April and October every year on the auspicious days of the ‘Navratras.’ In the days of Rajas and later during British rule, the rich forest cover veiled around Shali peak was famous for trekking, hiking and as hunting grounds. 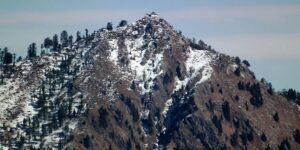 For those with limited time, a two hour drive from Shimla ends at the foot of the peak. From here, the summit is clearly visible. However, it still seems an intricate task. A century old trail, built by the local Raja in early 1900, unfolds on the mountain slopes shaded with a coniferous cover. Diverse Himalayan flora carpets the trail with numerous wild flowers and plants. 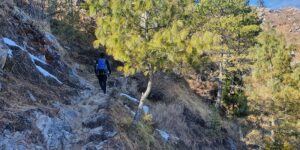 Silence of the forests is repeatedly broken with a gush of mountain breeze or a shepherd playing a melodious note on his flute. Walking for two hours to the mountain pass which connects the Sutlej valley with Shimla, at the base of a small temple, inscribed on a marble slab is the year of construction of road to Shali top.

The pace of steps accelerates and within a few minutes, you reach the top of Shali peak. It takes some time to imbibe the natural bounty and the spiritual ambience of the place. With a visit to the ancient temple and being blessed by Goddess Bhima Kali, it’s now time to enjoy a well deserved packed lunch. Bidding farewell to the place, it takes about two hours to descend to the car.

Those inspired by the idea of trekking, a short drive from Shimla brings us to Village Mashobra. From here, the bridle path plunges down into the valley to reach the river-bed. Through the exposed south-face of the valley, the trail advances up amidst rolling meadows, to reach village Deola. Housed at the base of the peak, Deola and its adjoining villages offer homestays and alpine camping options for travellers. The following morning, you can hike up to the peak, be blessed by the Mountain Gods and enjoy the undisturbed panoramic views of the Western Himalayan Ranges and Punjab plains. A day hike or multiday trek to Shali Peak is surely an unforgettable Himalayan experience.

TRAVEL INFO
The starting point for Shali trek is the Khatnol village which is 45 kms from Shimla. Distance from Khatnol to Shali Tibba is approximately 7 kms (one way).

Dhankar: A Fort on a Cliff