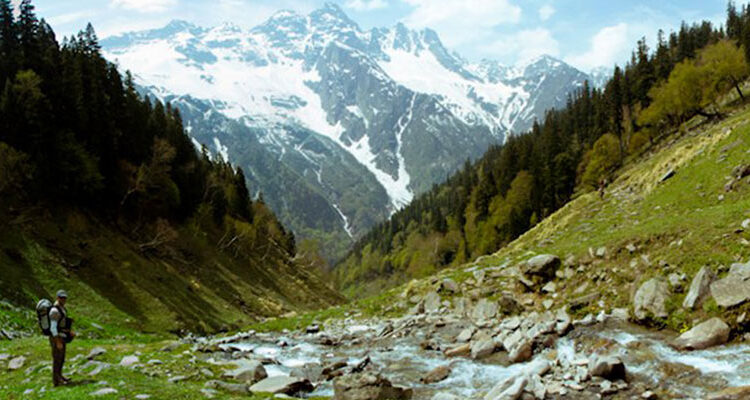 Known as Apple Valley, Pabbar Valley is a virgin land offering exhilarating views and is an ultimate spot for the offbeat travellers and nature lovers.  Pabbar valley is less travelled destination and has immense room for adventure activities like nature walking, Jeep Safari, Trekking and Fishing of trout and mahasheer. One can experience the enchanting magic of Pabbar valley by visiting some of the mentioned places below:

Dodra Kwar: Dodra and Kwar are the remotest villages with pristine beauty. Both the villages are separated by River Rupin. Traditionally designed wood houses with slate roof add more to the splendour of the picturesque hamlets. There are numerous wild flowers, medicinal herbs, thick woods of rhododendron, cedar and birch, waterfalls and fast-flowing streams.

Chanshal Pass: One will be surprized and overwhelmed by this unexplored part of Himachal Pradesh. Chanshal pass is truly an off-the-beaten path, a road less travelled. Situated at an altitude of 4220 mtrs, the Chansal Pass remains open from May to October. Chanshal Valley has some of the excellent ski slopes but remains unexplored with tourists. The only reasonable hotel in Rohru is The Chanshal by HPTDC is also named after this pass. Fruit-laden orchards further enhance the charm of this pass.

Hatkoti Temple: Situated on the banks of Pabbar river and in Jubbal Tehsil, Hatkoti Mata is regarded one of the most powerful Goddess. The Temple Complex has a splendidly built temples dedicated to Goddess Durga and Lord Shiva. Temple is said to have been built by Adi Shankracharya by local folks. The temple is also believed to be visited by Pandavas which is evident from the distinct stone temples built inside the complex.

Chandernahan Trek: Chandernahan is a hidden paradise and a sacred place having 7 Lakes where people can trek. The trek is moderate, provided you are well equipped. Chandernahan Trek is one of the most beautiful snow treks of the region and it is here that River Pabbar originates from. June – September is the best time to plan the trek.  The trek starts from Janglikh village to Dayra Thatch (4-5 hrs trek) where one come across thick forests, beautiful meadows and grassy lands. Next day start the trek to Lithan Thatch (5-6 hrs) where you will encounter waterfalls. Next morning move forward to seven glacial ponds which are a source of Pabbar River. Next day start excursion back to Simir Thach through Dayara Thach and on last day back to Janglikh village from Simir Thatch.

Days in the Life of Asha Workers