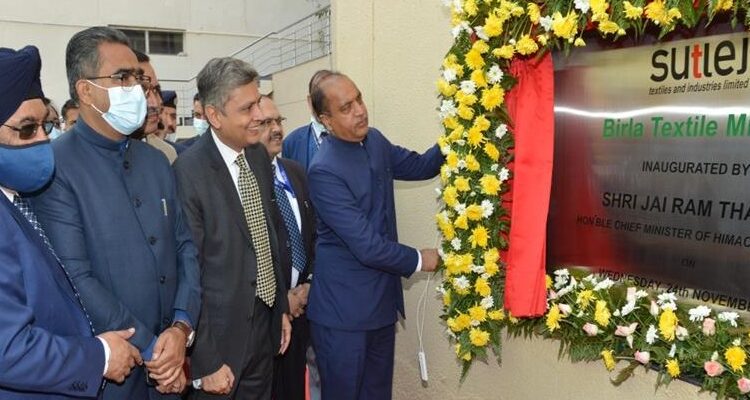 Baddi: Himachal Pradesh Chief Minister Jai Ram Thakur said that the state government was committed to make Himachal Pradesh the best investor’s destination in the country. He said that due to the continuous efforts of the state government, Himachal has attained 7th rank in Ease of Doing Business in the country today. Jai Ram Thakur said that for this purpose, the first successful Global Investors Meet was organized in the presence of Prime Minister Narendra Modi in the year 2019 in which investment MoUs worth Rs.96 thousand crores were signed. He said that within a month of the Global Investors Meet, the first ground breaking ceremony was organized in the presence of Union Home Minister Amit Shah, in which an investment of about Rs. 13500 crore took place. Jai Ram Thakur was addressing the people on the occasion of inaugration ceremony of the second unit of Sutlej Textiles and Industries Limited at Baddi on Wedensday.

Chief Minister said that to encourage more investment in Himachal Pradesh, the second ground breaking ceremony would be organized soon with expected investment of several crores. Himachal Pradesh government has been successful in getting the approval from Government of India on proposal of setting up a Medical Device Park of Rs. 269 crore at Nalagarh. He said that the state government has also taken up the matter of setting up a Bulk Drug Park for the state with the Government of India and expressed hope that the Park would get approval, in which an investment of more than Rs. 50 thousand crore would be made and would provide employment to 15 to 20 thousand people of the state.

He said that the detailed project report of the Electronic Manufacturing Zone to be set up with an investment of about Rs. 150 crore has also been prepared and soon it would be sent to the Government of India for approval. Jai Ram Thakur said that the pace of development and industrial investment was affected due to the Covid-19 pandemic, but under the leadership of Prime Minister Narendra Modi, the country successfully faced this challenge and inoculated more than 100 crore people with indigenous vaccine and India has emerged as the first country to vaccinate people with indigenous vaccine. He said that with the cooperation of all, the first dose was administered to cent percent eligible people in Himachal to protect them from Covid-19, while the second dose has also been administered to more than 90 percent people.

Industries, Transport, Labour and Employment Minister Bikram Singh said that the clean and safe environment of Himachal Pradesh makes it suitable for investment. He said that the state government is making continuous efforts to provide better facilities to the investors. He urged the entrepreneurs to invest more in Himachal Pradesh.

Earlier, Chief Minister Jai Ram Thakur inaugurated the second unit of Sutlej Textiles and Industries Limited at Baddi in Doon Assembly Constituency of Solan district. About Rs. 239 crores have been spent on the construction of this unit and it would provide employment to 600 people.

What Steps Government Must Take to Revive Tourism in Himachal Pradesh