Step back in history 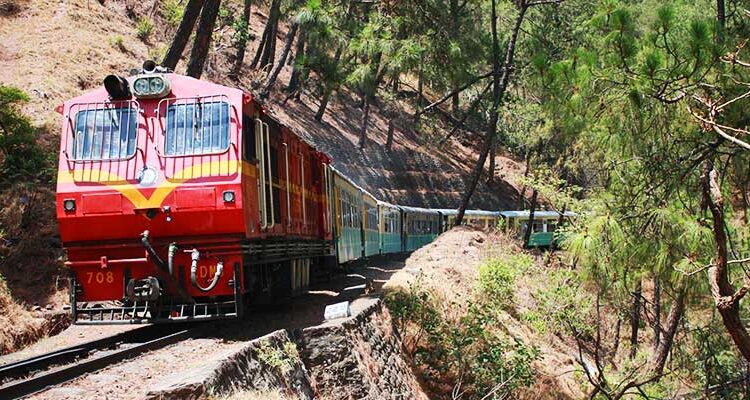 (By Sumit Raj Vashisht) I am here at Kalka Railway Station, sitting on an orange colored bench made of concrete. Like any other railway station of a growing town in India this also has the same features. Tea stalls, railway bogies parked in the yards, water taps, coolies smoking bidis and waiting for the trains to arrive, railway engines shunting between the yards and the railway station, some luggage carts laying here and there and some empty railway trackswaiting for the trains to arrive.
To the western end of Kalka Railway Station is the loco-shed with a work shop behind it, where the locomotives are parked and repaired.
Kalka is the termination point for the trains coming from the other parts of India and the mountain railway for this part of Himalaya originates from here rising up to the elevation of 2200 m at Shimla. First they built railway track till Kalka and got it connected to the winter capital of India, Calcutta – now Kolkata, and then in 1898 initiated the project to lay the railway track till Shimla.
In those days Kalka was a tiny railway station with no platform and no shed. Every day, one train arrived. Outside there were trees of neem, peepal, shesham and jacaranda. Tongas – the horse pulled carriages, bullock carts, mahawat with their elephants waiting outside the railway station. The animals remained tied to the tree trunks and the carts and the carriages rested nearby with their front poles placed down.
The scene outside the railway station was entirely different. The gate was generally blocked by the camel drivers, tonga-wallahs and mahawats of elephants. Every morning they waited for the train to arrive, bringing their customers.

As the Howrah mail would reach Kalka the passengers were immediately approached by the ekka-wallahs, the tonga-drivers and the mahawats. Ladies and kids were assisted by them with ladders to get off the compartments. The tonga drivers anxiously waited for the spring time and waited for their Sahibs and Mem-Sahibs arriving by train. Here came the month of March and they began to arrive outside Kalka railway station. Some of them did receive a letter from their sahibs well in advance and had it read by the postman or some school teacher.

Sahibs and their families, when they arrived, were completely exhausted due to the long and tiresome journey on the rickety bogies with wooden seats and open windows with no shutters or flaps, hauled by steam locomotives. Only a few stations had the facilities of food and water.
No one traveled light in those days. They carried not only their personal belongings but also they took their pets such as fowls in cages, dogs in crates and parrots and cats in other boxes. Passengers, on arrival at the Kalka railway station were directly approached and immediately, on asking, in case they required help and nodded, the bedrolls, trunks, boxes and other stuff was taken from them and loaded on the tongas. There was no chance for the passengers to wait or negotiate as they had fixed rates. A glass of cold water from the nearby pitcher stall was presented to the traveler, and as they were already exhausted after a tiring journey so no one would mind it.

All of the above mentioned items were divided on nearly eleven or twelve camels or, would be loaded on four or five country carts. More than four bullocks were required to pull one cart for uphill journey. Cows also accompanied the family and every morning the journey would start after milking them.
In 1891 the railway line to Kalka from Ambala was opened but it took some more couple of years to begin the work on Kalka Shimla Railway. The burning heat of Indian Summers made people sweaty during whole of the journey from Calcutta, now Kolkata, to Kalka. The wooden box like railway compartments which had no fans fitted and air conditioners were just like a dream. They creaked, rattled and bumped while moving on the steel rails and puffed hot wind through its window openings, kept the travelers humid. But their attention of the last stretch of the journey, up to the hills, gave them enough energy to tolerate all that. The scenery throughout the journey was attractive. The journey through the villages and fields of wheat, rice or sugarcane provided various glimpses of Indian life between the different stations. 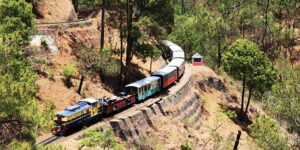 The journey uphill was always an excitement for the passengers after they started from Kalka. The initial stretch was gradual but as they advanced towards the hills the road would become steeper and narrower. The other camel drivers, bullock cart owners and the organizers of the horse carriages could be seen waiting for the passengers or just shouting to their animals to run faster and also to the crowd asking them to make space for their carts and carriages to move.

The road uphill was dusty and bumpy and the tip-tap sound of the moving horse, the sound of the bells around its neck and the landscape of the foothills made the journey interesting and attractive. After every twelve miles or so they had to change the horse, so the travelers would get some time to relax.
Oh! How the times have changed. In last century Kalka railway station has gone through much changes. I move to the outside of the railway station and stand at a distance to watch the activities of the taxi drivers.
Now the railway station has improved a lot. The platform shed provides shade during hot summer days and bottled water is available at the stalls. The entrance gate is a much improved with offices lining up from south to north. There is an enquiry counter manned by a clerk who is always busy chatting on his mobile phone and takes it as a burden to answer the public, making enquiries about the arrival and the departure of the trains.

The porters are almost jobless. Time has played with their traditional way of working. Now several trains arrive in a day and the passengers arrive with the suitcases fitted with tiny wheels under them, and thus refuse to take the help of the porters. Outside the railway station there are hardly any trees of neem, sheesham and peepal. All of them have been replaced by the buildings. Instead of the ekkawallas and bullock carts now there is a taxi stand. The taxi drivers have formed a union that is well supported by the political parties. They no more offer any water to the passengers and do not help with their luggage. The passengers also do not trust them. They charge very high rates to ferry passengers to the hills… and no one has the courage to negotiate with them.