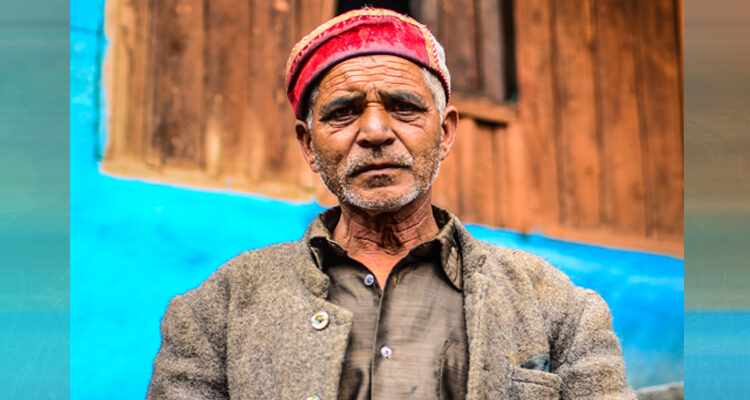 The Himalayan shepherds always excited me! Their ruggedness, their self-reliance, their proud yet humble nature amazed and thrilled my mind. It was my long time dream to travel to their habitat, stay in their midst and learn more about their lives and their environment.

After long last, my dream came true on 28th of April, 2018 when I left Delhi for Chamba -Bharmour region in Himachal, to spend some time with the Gaddi tribe and learn their ways in their ancestral lands. The Gaddis consider themselves descendants of Lord Shiva, trailing from the time when he roamed around wildly in the hinterlands of the Manimahesh ranges. The Ravi Valley of Chamba in Himachal, having some of the most rugged terrains of the Himalayas and commonly known as Gadderan is considered the homeland of the gaddis. As such, it was only natural that I planned my journey around Chamba and Bharmour- one of the principal settlement in Chamba district. I intended to reach Chamba, proceed to Bharmour and travel to the remote gaddi villages of Kuarsi and Kugti.

Gaddis were nomadic shepherds (puwaal) by origin, grazing their herd (paal) of goats and sheep. Herding is the prime activity since only goats and sheep can survive the high altitude that the gaddis are used to.

Keeping in mind, their nomadic origin and tough environment, gaddis are used to a dietary habit of once-twice a day at the maximum. Utmost care is taken to avoid any wastage of food. Their indigenous dress code consists of a flowing scarf/ gown like garment draped around their body which is known as Choru. The Choru is a helpful piece of garment for survival, as it is long enough to be converted into a makeshift tent if the gaddi encounters rain. Made out of the purest version of sheep wool (pashmina), it’s both waterproof and cosily warm in nature to save the wearer from the chilling cold. On 28th April, I reached Chamba at 8:30 in the night after leaving Delhi at 3 in the morning, following the Ambala-Ludhiana- Jalandhar- Pathankot- Chamba route, traversing 630+ Kms from Delhi.

I kept on riding and came across a bridge, 12 Kms before Holi. Took the right side road after crossing the bridge and reached the road end to reach Kuarsi village. I was informed that one had to trek about for half an hour from this point to reach the village. It was getting late and I started trekking the rough trail for Kuarsi. I kept trekking on and on but Kuarsi wouldn’t arrive. By 8, I decided to call it a day as it was truly dark and camped near a Devsthal.

I finally reach Kuarsi village after a 40 minutes trek from the Devsthal where I camped the previous night which made it a little over 1 hour trek till Kuarsi. My contact in the village – Chamelu Ram wasn’t there. So a helpful guy by the name of Sanjay and his Nepali friend – Dai, volunteered to show me around Kuarsi.

The houses of Kuarsi were very beautiful and peculiar in their design. They were a rugged mix of wood, mountain rocks with slate used for the roof sometimes.

The structure of the houses enthralled me. Sanjay narrated to me that the gaddi people would much rather prefer drinking the cool spring water than the artificial pipe water. The Indrahar Nag Mandir in the vicinity of the Indrahar Pass is at a distance of 15-20 from the village. There is a famous Nag Dal (lake) near the Indrahar Nag temple which is associated with many folklores of the region. A huge crowd from the village, all over Himachal and rest of India travels up to the Indrahar Nag temple from the Kuarsi village side during Krishan janmashtami at which time, a large mela is conducted on the ground of the temple. Sanjay was a wealth of information as far as gaddi people and their practices were concerned. He informed me that when snow makes it impossible to visit the main Nag temple, the temple is shifted from the time being of Dec 15-Mar 25 to the Kuarsi School Compound for all praying purpose.

The grazing season of the herds is a narrow two month window from May to June/ July. Gaddi shepherds all over Bharmour, Kugti (my next destination) and Chobiya reach Lahaul and Pangi region while grazing their herds. However with the advent of technology and lifestyle conditions, the number of herders (puwaal) and shepherds are decreasing in the gaddi community. This can also be attributed to the road safety and increasing incidents of thefts due to which the gaddi herders feels threatened and is taking up alternative/ contemporary lifestyles like getting a formal education and searching for jobs in the city/ commercial hubs of the region.

I enter the Kugti Wildlife Sanctuary by 7:30 in the evening after leaving Bharmour at 6pm. A large herd of 200-300 goats and sheep welcomes me to Hadsar which a junction point from where the famous Manimahesh yatra starts. As I reach Kugti roadend by 7:45, I could see that the bike won’t be able to make it to the village and I shall need to trek. I saw a couple of shepherd boys from the distance and as it was quite dark, I gladly play with the idea of camping with them for the night and proceeding to Kugti in the morning. After last evening’s trek, it was only logical that I be wary of another evening trek in unknown territory. My arrival was marked by the special occasion of the one of the goats giving birth to a cub.

Vicky, the elder brother was relatively new to the gaddi shepherding lifestyle than his younger brother – Mandu who had given up schooling and was dedicatedly into shepherding their family flock. Both the brothers had to be on their toes throughout the night as the new born cub was a goat and not a sheep. A newborn goat kid needed much more care and attention than a baby sheep which could start running the mountain side on its first night itself. However, a baby goat was more vulnerable to the cold and needed upto 3 days to run about. The first night was always crucial which is why the brothers had to run about getting the kid to drink the mother’s milk without which it had next to nil chance of survival. 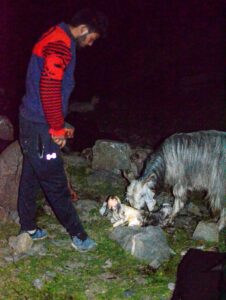 Vicky, the more enterprising of the two told me that he had just completed his mechanical engineering from Shimla and had returned to spend some time with his family when his younger brother invited him to accompany in shepherding the herd, as a few of the goats were due for delivery and Mandu could use the extra help. Vicky shared quite a few gaddi folktales with me as we set about procuring our dinner and told me that an average sized herd would have 200-300 goats and sheep. The proportion in a 150 sized flock would be 100 sheep and the rest goats. There would be two-three breeding sessions in a year and the size of the flock doubles and sometimes triples in six months, depending upon the quality of grass the herd is getting and the weather. The gaddi shepherd boys cooks and eats by oneself in stoves and utensils that they carry. They procure ration once the existing is on the verge of exhaustion from the settlements they pass. An average diet would be a combination of either roti and dal (lentils) or sabji (vegetables). 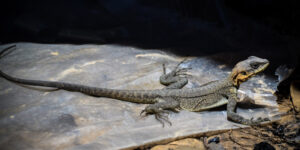 A Walk in the Kugti Wildlife Sanctuary! Amazing biodiversity!

Goecha La: The Crown of Sikkim

Rohtang: Not Just Another Pass