It is simply hard to believe that a place with such an exotic beauty, picturesque scenery, and salubrious climate doesn’t find a place on the traveller’s map. But you must visit this breathtaking and incredible hamlet amidst mountains which is your gateway to getting you away from the dreary routine life of a metropolis. This place reminds me the desire once expressed by Robert Frost in his famous poem ‘Birches’.

“I’d like to get away from earth awhile, And then come back to it and begin over.”

If you have the same wish then you must visit Chamba at least once in your lifetime. This town in the north-west corner of Himachal Pradesh is distinctive and unique in terms of vast geography and history, culture and tradition.Its unique location and the sample of other aspects beguile the travellers visiting the Chamba town. The spectacular location surrounded by the panoramic snow views stands as antique as a jewel of itself.

Chamba’s charm isn’t immediately noticed, as the town completely lacks in terms of exposure. You may still experience a feeling of remoteness, solitude and absolute serenity which is missing in most of the hill stations of the modern day. It takes at least a good day to get your running shoes to enjoy the amazing charm of the town. The center of the town is a place known as Chaugan-”the four-sided” ground which is surrounded by impressive administrative buildings, shopping arcade built during the British Raj. The vast grassy land is a beautiful place and is the center of all cultural activities of the town.

Don’t expect a luxurious stay in this town. Chamba’s restaurants may not be as fascinating as the other hill stations’ but they offer you some local delicacies from the Himachali cuisine such As Rajmah Ka Madra which you may not find at other places. You may also taste delicious Chaat near the Chaugan provided by the local vendors at a very cheap price.

The best deal in town is Bhuri Singh Museum. This museum has a remarkable collection of Pahari miniature paintings from the Chamba, Basholi, Kangra and Guler schools, including other arts such as the intriguing copper-plate inscriptions, the embroidered Chamba rumals (handkerchiefs), coins, hill jewellery, traditional and royal costumes musical instruments and various decorative objects is another attraction of the place. The museum remains open from 10 AM to 5 PM throughout the year except on Monday and other gazetted holidays.

The architectural history is an imposing beauty of Chamba city with the number of temples explaining its rich historical past. The ancient temples holding the grace of great architecture are also driving visitors to this place.

On the top of the list is 10th-century Lakshmi-Narayan Temple Complex. Here three temples are dedicated to Lord Vishnu, and the other three to Lord Shiva. The temple complex is known to be well preserved since its birth. There is another temple called Brajeshwari Temple, which has excellent carving and the 11th century Hari Rai temple near Gandhi Gat, enshrines a marvelous bronze image of Lord Vishnu in the form of Chaturmurti. Much of this temple is hidden behind some unimaginative structures of the British period and the Fire Station Building. The Chamunda Devi temple on the hilltop has artistic carvings on its lintel, pillars and the ceiling. Behind the main temple is a small shrine of Lord Shiva in the Shikhara style. In addition, Sui Mata Shrine and Champavati temple are of great religious importance. Akhand Chandi palace and Rang Mahal are some of the prime places to be visited in Chamba. Also worth visiting is town’s only Christian church ‘The Church of Scotland’. 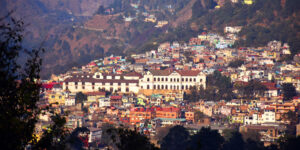 Two days are enough to explore Chamba town if adventure activities are not the part of your agenda. The mesmerizing Chamba valley is the gateway to some of the remotest places. Chamba also takes one to various treks over the Dhauladhar and Pir-Panjal ranges. These treks lead to Kishtwar in Jammu & Kashmir, Manali, and Lahaul. The natural beauty of the place forms the perfect compassion to any traveller to taste the exploration. Chamba embraces the picturesque Bhandal valley which links Chamba with Kashmir and worth mentioning is the dangerous beauty of Chamba-the “Pangi valley”a special place for adventurous souls and a different world in itself to explore.

Bijli Mahadev – A Temple in Kullu that You cannot Miss

Lodhi Garden- A Perfect Recipe of Blended Artwork and Architecture