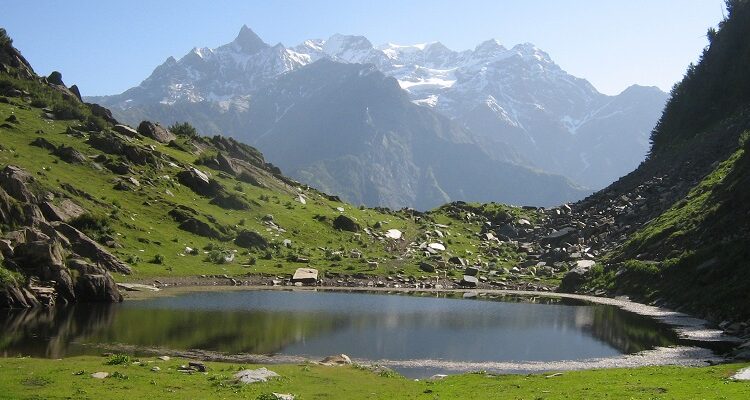 Himalayan high altitude wetlands (HAWs 3000 masl) are crucial for biodiversity and sustainable economic growth not only locally but also at the river basin and regional levels. The Himalayan high altitude wetlands are physiographical and ecologically unique. The Himalayan Mountain has been described as the “water tower of the World”. Himachal literally means “abode of snow’ and the entire state is composed of mountainous terrain, beginning from the Shivalik foothills, and reaching upto the Trans-Himalayan heights of the Zaskar range on the border with Ladakh and Tibet. In the lap of lofty snow-clad mountains of Himachal Pradesh, there are myriad lakes with cool and serene water, which mirror the immense beauty of this paradise on the earth.

The high altitude wetlands constitute a very important part of the alpine ecosystem of the Himalaya. Many of them are sacred and considered deities.

People have their religious attachment with these lakes. Fair and pilgrimages were held every year in these lakes and lakes of pilgrims visited for holy dip in these lakes. These lakes are also providing habitat and grazing ground for the wildlife and livestock. The values of these wetlands are currently underestimated. Some of the ecosystems functions of these wetlands are detrimentally affected. These lakes are vulnerable by different emergent anthropogenic threats and environmental changes including overgrazing, construction of hydropower projects, other infrastructure, pollution and climate change. 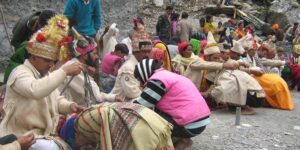 There are many high altitude lakes in Chamba which attract tourists and pilgrimages during June to September. Some of them are Manimahesh, Lama Dal, Complex Lama Dal Lake, Chanderkup, Dham Ghori Ka Dal, Sukh Dal, Mahakali lake, Nag Dal, Kyur Dal and Ghadhasru lake. Out of these lakes the description of the Manimahesh and Lama Dal lake is given next. 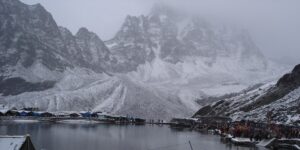 Manimahesh Lake is located in the Budhil valley at the foothill of Manimahesh range in Bharmour Tehsil of Chamba district of Himachal Pradesh. The lake’s catchment area touches Kangra district to the east and Lahul-Spiti to the west. The area is situated between the Dhauladhar and Zaskar range which runs from South-East to North-West of Chamba district. This region is separated from Pangi Valley by a mid Himalayan range called Pir Panjal or Pangi range. District headquarter of Chamba is 422 km from state capital Shimla. Bharmour is 72 km from Chamba.

The base camp for the trek to the lake is located at Harsar, 14 km from Bharmour. On way to the lake, the first camp is at Danchoo, six km from Harsar. After Danchoo, the trek to Gauri Kund at a height of 4000m asl is steep and difficult, partly because as the air start getting rarer. There are two ways to reach Gauri Kund, one via the Bandar Ghati, and another via Bhero Gaahti. As per local customs only women devotees are allowed a holy dip in this small lake. The water of Gauri Kund lake is warm as compared to Manimahesh Lake, two km from the Gauri Kund. Rocks in the lake vicinity are sedimentary and of natural origin. The soil is mountainous, clayey or loamy with gravel. The shape of the lake is elliptical. This lake is shallow near the outer periphery and quite deep in the rest of the area. The depth of the lake has not been measured. The origin of the lake is from melting glacier of the surrounding area. The temperature ranges from -250C in winters to 150C in summers. The climate is temperate with well marked seasons. The area is inaccessible due to snowfall from September to May.

This lake is considered sacred lake and is dedicated to Lord Shiva. It is the highest in the hierarchy of sacred water in Chamba district and located at the base of the Manimahesh Kaliash peak (5656 m). As per Hindu mythology, the Manimahesh peak is the Kailash Parbat – one of the mythical abodes of Lord Shiva. In 1968 an Indo-Japanese team led by Nandini Patel made an unsuccessful attempt to scale this peak. In the month of August/September famous Manimahesh Yatra starts from Laxmi-Naryan temple in Chamba. Every year lacs of pilgrims visit during monsoons months (from Janamasthmi to Radha-asthmi ) from different places for a holy dip. The water of the lake is considered holy and pilgrims carry some of it to their homes for religious ceremonies. 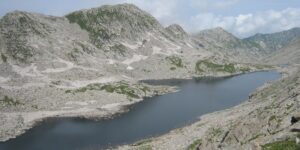 Lama Dal lake originates from the Chander Kup lake which in turn is fed by the icy waters of melting glaciers from the surrounding hills, 1.5 km further up in the Dhauladhar mountains. The Lama Dal is formed by a group of eight lakes, seven of which are tarns. These small lakes surround the largest of the group, colloquially called Lamba Dal (long lake) pronounced as Lama Dal by the locals. The area is situated between Dhauladhar and Zanskar ranges which runs from south east to northwest. The rocks around the lake are sedimentary and of natural original complemented by mountainous soil. The landscape around the lake is composed of huge boulders and barren rocks.

Lama Dal is located in district Chamba near the historic Balaini Pass. To reach the lake one has to trek 30 km from Shalli village in Shahpur tehsil of Kangra district. The trek from Shalli is very difficult and steep and Lama Dal is across the Balaini pass at an elevation of 3740 m asl. Other way to reach Lama Dal is through Bherai village via Dunali accessible through a road journey of 30 km from Chamba town. From Bherai one reaches Lama Dal lake after a 25 km trek. 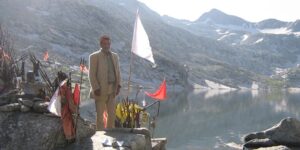 Lama Dal is dedicated to lord Shiva. The lake is considered to be sacred and religious. Every year a fair is held for one month from Radhasthmi to Janamasthmi and pilgrims visit the lake. The lakes are visited by a few trekkers also every year. The Bhereri Nallah (stream) towards Chamba and Gaj River towards Kangra originate from the Lama Dal lake. A small Shivlinga and a trident are installed on the northwest side of the lake. Very recently, the women devotees have started visiting the lake. There is a story that a woman from Bhereri village had no child. She worshipped lord Shiva to bless her with a son. After she was blessed with a son, she organised Nawala (Shiv Pooja) near the lake. After this incidence women started visiting these lakes for the holy dip.

Now local people from Chamba and Bharmour also come to organise nawala. Land in the catchment area is used for grazing cattle by the nomadic Gaddis. Although the area surrounding the lake is under Forest Department, the local shepherds have their rights for grazing. The licence for cattle grazing is issued to the Gaddis by the Forest Department in the downstream pasture area of the lake. During the grazing season Gaddis with flocks of goats and sheep as large as 600 stay here for up to three months.