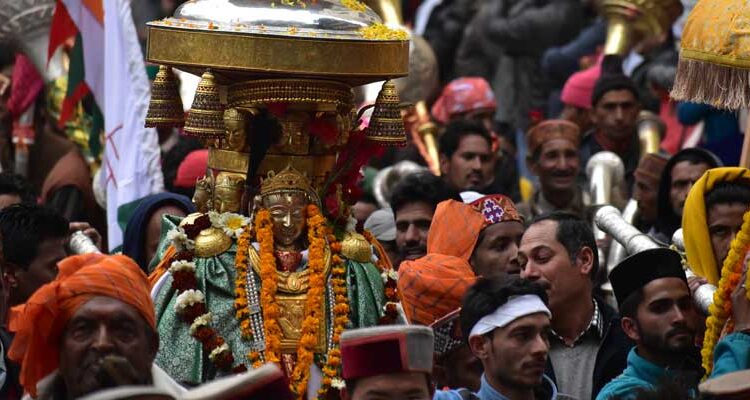 Mandi is renowned for its 81 old stone temples and their enormous range of fine carving. Because of this, it is often called the “Varanasi of the Hills”. These temples are built in between 16th and 17th century. The most famous temples are Madho Rai temple, Tarna Devi temple and the Bhootnath temple where the Shivratri festival is celebrated with joy and ecstasy. Shivratri festival of Mandi features varied scenes that stays in your memory for the times to come. The week-long fair will start from February 22 this year in which more than two-hundred deities will arrive in the town for the event.

Cultural and religious festivals that have been celebrated in the land of Himachal Pradesh for many years are still celebrated with the same fervour. One of those festivals is the “Festival of Gods Meeting Mankind”, that is, the festival of Mandi Shivratri which is celebrated with great pomp in the same traditional flavour. Like the week-long Kullu Dussehra festivities, Mandi’s Shivratri sees a congregation of the divine and the temporal. Over time, this Shivratri festival has added some new dimensions to it, but there are some aspects of this festival which still follow the traditional practices that can be enjoyed for several days and cherished forever.
In the temple of Baba Bhootnath, the presiding deity of Mandi city, a water bath placed on the Shiva lingam is lifted a month before Shivratri and a paste of butter is applied on it daily, which gradually assumes the form of a large Shiva lingam. The tradition of dressing the Shiva lingam with butter in the temple during the Shivratri festival has been going on for centuries. 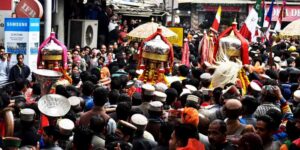 The Mandi Shivratri fair gives a glimpse of the rich “Dev culture”, with over two-hundred deities from all over the district visiting Mandi for a week-long festival every year. The fair starts with the ‘Jaleb’ of Madho Rai, the chief deity of the Shivratri fair, in which all deities and their orators (locally known as gur) participate. The deities stay in their temporary camps at Paddal ground along with their followers. 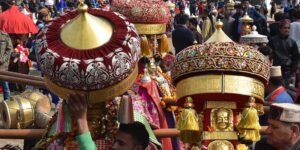 On the day of Shivratri, the sight of the deities coming to Mandi is worth seeing. As the deities who are carried in palanquins start reaching Mandi accompanied by their worshippers, drummers and pipers, the whole atmosphere takes a festive hue. The people of Mandi city gather in large number to welcome and greet their favourite deity and kul devta. Every deity, decorated beautifully, first visits the Madho Rai temple to pay homage to Lord Vishnu and then proceed to Paddal ground in a colourful procession which is called as ‘Jaleb’. A huge crowd turns up to witness the event, which is a splendid show of deity culture. 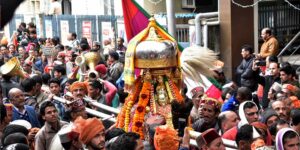 The Shivratri Festival holds a special attraction in the form of decorated palanquins of the different gods and goddesses who sit in their marked places in the Paddal ground where thousands of devotees pay obeisance. The entire scene is a sight to behold. However, some deities do not come to the Paddal ground throughout the celebration week. They are the ones who follow the Narol practice in the Rupeshwari Temple all week. Prominent among them are Devi Baglamukhi, Devi Budhi Bhairava, Devi Kashmiri, Dhuan Devi, and Devi Rupeshwari, who do not attend the fair. Apart from this, Dev Kamaru Nag, a principal deity of the festival, as well as Dev Budha Bigal, do not attend the fair. Dev Kamru Nag, after paying obeisance to Madho Rai on the first day of festival, moves to his temporary camp at Tarna Devi temple at the top of the Tarna hill from where he observes the proceedings of the fair for seven days, while Dev Budha Bigal resides in the Rupeshwari Temple during the entire fair. 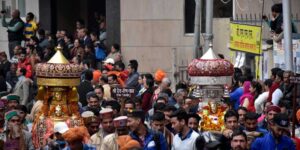 The Mandi Shivratri festival is a grand gathering of deities, wherein over two-hundred deities sit together during the one-week affair and gives an opportunity to devotees to pay obeisance in a single place.

A Jagran is held a day prior to the concluding day, where gurs of some of the main deities announce prophesies for the following year. On the last day of the festival, all deities including Dev Kamru Nag assembled at Chauhta Bazar, to provide an opportunity to those who had not been able to seek their blessings. Dev Adi Brahma completes the circumambulation of Mandi city which is an important tradition that ensures a security cover to the city for rest of the year. The responsibility of protecting Mandi city from diseases and other calamities was handed over by the kings to Dev Adi Brahma, and the same is still discharged to ensure well-being of the town and its residents till the next Shivratri. Prayers are chanted and after paying obeisance to Lord Shiva, all deities leave to their respective abodes after their sojourn to Mandi for a week. 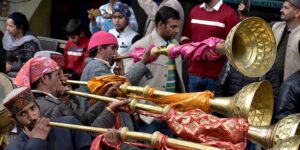 TRAVEL INFO:
International Mandi Shivratri Festival || Date: 22 Feb – 28 Feb 2020  || Venue: Mandi, Himachal Pradesh
How to Reach:
By Air: The nearest airport is the Kullu Airport at Bhuntar, at a distance of about 60 kms from Mandi.
By Train: The nearest railway station is at Kiratpur Sahib (127 km) in Punjab.
By Road: Mandi is approachable by road from Shimla, Chandigarh, Pathankot and Delhi.
Accommodation: There are numerous resorts and hotels in Mandi wherein booking can be done both online and offline.

Changing Tourismscapes in the World

Dhankar: A Fort on a Cliff