A Getaway To Beautiful Uttarakhand 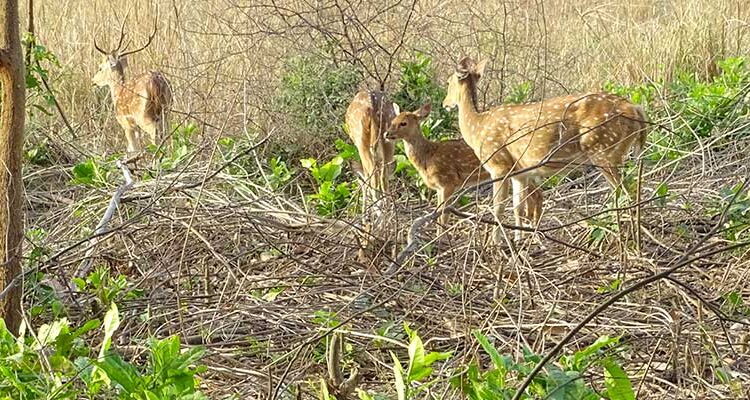 (By Pratibhu Roychowdhury) After months of planning and a 22-hrs long train journey, we finally made it to the Jim Corbett National Park one fine sunny morning. Amidst high hills, plush greenery and a creek flowing nearby, it was the perfect start for our getaway trip to one of the least explored hill-state of India – Uttarakhand.

The calmness of the imposing hills soothed our nerves. A swim in the river seemed too tempting to miss and soon we were in the cold water, enjoying ourselves like a couple of teenagers. There was a lot to cover on the first day. Refreshed after our long journey from Kolkata with the swim, we set out for a Jungle Safari in the afternoon. The four hour ride through the protected area of Jim Corbett National Park was both serene and adventurous. 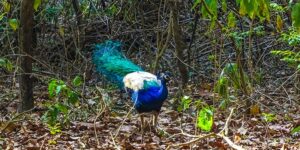 Wildlife thrives here with spotted deer running about everywhere, peacocks cawing away and a tree full of bee hives made for an interesting outing. We missed our date with the Tiger by a mere 30 seconds. Soon, dusk hit the area and we retired into our nests although sleep was not on our agenda until midnight. Out came the acoustic guitars and a relaxed fun-filled music session unfolded. Eagles, Metallica, Guns-N-Roses ruled the evening, teleporting us back to our carefree childhood days that magical evening. Some of us went for walks in the dark and sat by the river gazing at it flowing endlessly and enjoying the silence that city life can never provide. Time flew by rather quickly on day one.

It was a late morning for us the next day. By the time we woke up, it was already time for us to leave Corbett and head towards our next destination: Lansdowne which is about 3 hours away. We hit the road again, bags packed and high on the spirit of travelling. Our destination is a quaint little hill town which is an army cantonment area and the headquarters of the legendary Garhwal Rifles. Due to late start in the afternoon, we reached Lansdowne around 7 in the evening. Here too, guitars and the cool whispering mountain breeze helped us relax. The following morning was bright and clear with great views of the flora atop the hills. We started the day early, as we had some sightseeing to do.

Lansdowne is a quaint hill station and a pit stop for the journey towards higher regions of Uttarakhand. Chopta near Lansdowne is base from where the Tungnath trek orginates.

We made our way through the markets of Lansdowne in order to experience the essence of the local lifestyle. We carried on to a nearby view point which gave us a wonderful opportunity to photograph the valley below. After hiking to the famous churches, we zipped-zapped to Tip-n-Top, Bhulla Taal and the Garhwal Rifles’ Heritage museum.
We left Lansdowne by mid-afternoon, hoping to reach our next stop, Ukhimath by late evening. Alas, in the stretch between Lansdowne and Ukhimath, we had five flat tyres. It was a messy situation before things came under control. What should have been an eight o’clock arrival went on to become two in the morning. But, hey! We made it to Ukhimath. After somehow managing to enter our rooms in the dead of night, we called it a day.

Next morning, as we stepped out, we were awestruck with some of the views we witnessed. The snow-capped peaks of Nanda Devi and many other adjacent peaks were shining in their full glory in the morning sun. A sight of these high mountains was the only think we wanted to behold and there they were. After a light breakfast, we moved further up to Chopta, a 20 minutes drive from Ukhimath. Chopta is the base from where the trek to Tungnath/Chandrashila begins. Tungnath is one of the five “Panch Kedar” temples located in the Himalayas, and is also the highest of the lot. It is perches at an altitude of more than 12000 feet above the sea level. The renowned Valley of Flowers is also not far off and the same flowers which give the valley its name adorns the slopes of Chopta too. Multiple hues of pink and red from the Rhododendron trees line up the hillside presenting a rather colourful approach to the Tungnath trek. Most people start the trek in the morning and reach base by evening. We had a different agenda. We wanted to climb down in the dark to add to the adventure. Accordingly, we started the trek by late afternoon. A narrow but well laid out path lead us on our trek towards the top. As the gradient got steeper, our city dwelling lungs worked overtime to gasp for oxygen. At this altitude, the air is both thin and lean on oxygen concentration. Maintaining a steady pace, we made our way through the winding stony path and arrived upon a picturesque meadow, what the locals call Baggi or Bugiyal. Lined with trees on the periphery, this grassland happens to be a preferred camping site for many trekkers.

The higher we climbed, the better the view became. The clouds playing hide and seek with the peaks, the silhouettes created by the light and shadow and the contrast of the hillside colours is a sight to behold for any nature lover.

The backdrop of the snow peaks never fails to mesmerize you every time you look at them. Everything else looks insignificant in front of such grandeur. The trek is 7 kms in one direction. Close to the top at about 10,000 feet, we stopped for some tea and snack. It was surprising to find a shack at this altitude.
Finally, after two and half hours of trekking we reached the Tungnath temple. Surrounded by the mighty Himalayas, it is a place where one feels how insignificant we are in this massive planet.
After taking photographs and resting for a short while, we continued towards the top – Chandrashila. The summit offers a 360 degree panoramic view of the Himalayas. All the major peaks in this region are visible from here including the Chaukhamba range, Kedardome, Thalaysagar and the Gangotri ranges. We reached the spot an hour before dark descended completely. One cannot have enough of this sight and it feels like you can stay and watch these mountains forever.

As the dull glow of dusk slowly started to set in, we began our descent back to Chopta. Nightfall happened rather quickly, but this made the sky come to life with millions of stars, a sight we do not get to see in cities owing to pollution and bright lights. Slowing retracing our footsteps, we sensed the eeriness that surrounded us accompanied by the melancholy sound of the crickets buzzing in the woods. After about an hour of downhill trekking, we reached the camping meadow and soon thereafter our rooms, exhausted yet exhilarated. We had accomplished what we came for. The rest of night was spent in discussions of the trek that was.
The next morning brought in the last leg of our trip. We had to cover 164 kms and reach Rishikesh. Time for some adventure sports! After a heavy breakfast, we started driving downhill accompanied by the Alakananda River, almost throughout the stretch. The winding mountain roads with snow peaks visible in the distance gave way to lush green hill sides. The spirits were high after the successful trek.

By afternoon, we reached Rishikesh and made our way to the campsite. Tents right beside a narrow river stream with the backdrop of mountains made us feel right at home.

It was a day for relaxing, so out came the guitars and music flowed yet again. We hit our beds early since we had white water rafting coming up next morning. The last day of our vacation started early. We headed towards the point from where the rafting begins. Life jackets on, oars in hand, we were ready to take on the rapids of the Ganges. A first time for the lot of us, we were buzzing with anticipation and fear at the same time. The inflated rafts looked secure enough and our instructor gave us the confidence to go ahead. The water was refreshing, yet fearsome and gentle. A lot of us jumped into the river alongside our raft for a quick swim. After three hours of paddling and rowing through rapids and calm zones, we made it to the finishing point with a sense of accomplishment and happiness. Back in our tents an hour later, we finished lunch and headed towards the main market of Rishikesh to see what we could lay our hands on. As evening came, we headed towards Lakshman Jhula and crossed it to sit by the river and relax. The return journey to Kolkata was about to commence in a few hours, yet we managed to sneak in a few hours to sit and talk about the trip that was about to end, sharing stories and experiences that we all were a part of for the last 8 days. Many memories created, many fears conquered.
As the clock struck 9 o’clock, the others started for Haridwar to catch their overnight train to Kolkata, while I boarded a bus to Delhi. With the beautiful Himalayas still lingering in our minds, we dispersed.

TRAVEL INFO
IMPORTANT DISTANCES:
Jim Corbett- Delhi 260 kms.
Jim Corbett- Lansdowne: 126 kms. Lansdowne- Chopta: 210 kms.
Tungnath- It is one of the five and the highest Panch Kedar temples located in the mountain range of Tunganath just 1 km below the Chandrashila peak. (Tungnath is 7 kms trek from Chopta base). Distance between Rishikesh-New Delhi: 233 kms.

7 Reasons To Go On A Driving Holiday